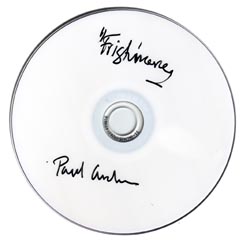 Continuing on from yesterdays post, regarding the professional presentation of your film. I was recently involved in a short film evening for charity. The film makers had all sent DVD’s and to my eye, only one was really acceptable in appearance. Most had just scrawled the name of their film, only a few had relevant contact details such as a phone number and email, all were not 100% presentable to a professional film community (never mind dodgy menus and incorrect aspect ratios etc. on the film itself).

Consider, you don’t know where a DVD may ultimately end up? An agent? A producer? What if they like it can’t find you because there are no contact details, or the details are so badly written, you can’t read them. Of the ten films I was given on DVD, two were illegible. The picture here is a mock up (I have changed the title and names) as I don’t want to embarrass the film makers in question, but it looks exactly like the DVD I am holding in my hand right now.

1. Every disk should have your contact details clearly printed.
2. Buy a colour printer that can print directly onto printable disks, they cost only £60!
3. NEVER send disks out that are not 100% professional in appearance. NEVER EVER!
4. You want to stand out from the crowd. It’s so easy to present yourself professionally. That will put you in the 20% immediately.

'Withnail and I' Script to Screen with Bruce Robinson #LondonSWF
The curse of too many great ideas… proliferation equals indecision
Big Vision: How To Attract Prolific Producers To Your Script #LondonSWF
Submitting scripts
An Evening With Kevin Smith
Nothing is constant, except change… The death of Prime Video stores