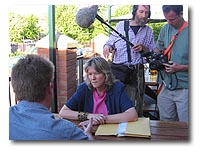 Many new drama film makers are turning to documentary as a REAL WAY TO MAKE MONEY and survive! We at Living Spirit have done so already. Have you thought about it? What are you currently doing to stay afloat? Have you thought about using your camera, editing software and website as a real way to make a targeted documentary, market and sell direct?

What we have found is that many new film makers are making shorts, low budget features, and not making any money… but the ones who have made a good Documentary, often at the same time as working on Drama, have sold their Doc and made profit. So to expand on this new emerging business model, we are running a one off course for film makers who want to take advantage of this new way to make movies AND make money.

Documentary Film Making is EXPLODING with new film makers winning Oscars, doing deals with broadcasters, selling DVD’s direct, and all with technology they could buy with a credit card. In short, making movies, winning major awards, reaching audiences and making money… We show YOU how to turn YOUR GREAT IDEAS into GREAT DOCUMENTARIES and start a career making movies, AND making a living!

This one off, two day intensive seminar, is run by the authors of The Documentary Film Makers Handbook who are flying in from LA for the event – Brit Film Maker Genevieve Jolliffe and seasoned US Doc Film Maker Andrew Zinnes. They are professional filmmakers who have worked in both the narrative and documentary arena for nearly two decades. Their docs have been seen on the MTV, PBS, BBC, ITV and Ch4.

Our goal is to empower YOU to make informed concept choices, to clearly see the market and target it, and to secure funding for your doc and actually make a living from that camera in your hand!

Final FREE Xmas PodCasts on 2 Documentaries...
Watch extraordinary documentary about the making of arguably the greatest movie ever made:...
"From One Second To The Next" shocking doc about texting and driving by Werner Herzog
Urban Ghost Story, the making of... And the complete soundtrack by Rupert Gregson-Williams
Powerful and inspirational seminar; an insight into Documentary Film Making with Geoffrey ...
Final Call for the London Documentary Summit this weekend

Everything is negotiable…
£10k Comp for Genre Movies