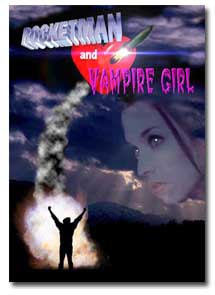 And so it begins…

I can’t say with who just yet, but my long term movie project, Rocketboy (previously titled Rocketman and Vampire Girl) has shifted several gears and I am much closer to it being made than I have ever been.

The only downside is that they don’t want me to direct, as I am not a ‘bonded’ director and my credits are for very low budget films that were made more than a couple of years ago. While I want to rant and get angry about this, I have chosen to see the problem from their perspective. And I can see the problem quite clearly.

I need to give everyone involved in the finance as many reasons to hire me as the director as I can possibly muster. And I may be asking for your help in due course too.

So what do I need to do?

I am going to spearhead a multi pronged attack, starting with a short film, on 35mm, produced to the highest possible standards. Quite simply, I need to get Oscar nominated at the 2008 awards. That’s the goal. It’s called ‘Gone Fishing’ and I will be writing more about it in the coming weeks.

I will also be shooting some key scenes from Rocketboy, to prove I can work with kids and draw out wonderful performances. I will also be producing animatics, and more artwork…

This blog, for the next few months, is going to follow my journey to convincing EVERYONE that I am the right man for the job.

So strap in and prepare for Blast Off!!!!

How I decided to make one film, then chose to make another
‘Inception’, a screenwriters masterclass
Project: Rocketboy... top ten tips for getting feedback on a screenplay
The mountain lies ahead and my feet feel heavy...
Forget mission statements, genres and log lines… Try three little words instead
Why story days are essential for your screenplay: Rocketboy redraft nears completion

How To Make A Film Part 3 in Total Film-Out Now!
First script notes truly worth their weight in gold!