By Chris Jones on January 23, 2008 in Festivals, Film Production 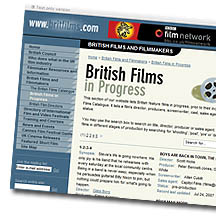 Every film I have ever made has made it out to many film festivals. Luckily for me, I live in the UK and the British Council has always been there to help get my movies, and the movies of other UK film makers, out there. Essentially, they help promote British Culture abroad. I am going in to see them on Friday, to see what they can do for Gone Fishing. I have high hopes. The BC also has a great website at…

Rather worryingly though, the government wants to cut back on their activities… I don’t know the full extent of what’s going on, but I just got the letter below from the The New Producers Alliance (NPA) – it would be great if you could forward it to anyone you know who you feel would take action…

As I said, when I know more, I will report back…. Here is the letter from the NPA….

Dear Members, Friends and Colleagues, the New Producers Alliance is writing to voice it's concern at the current restructuring of the arts departments within the British Council and the consequent closure of the Film Department.

As you are probably well aware the British Council Film Department has provided essential services to the independent filmmaking community and it is out of respect for the work of the department that we are writing. The film department was already forced to take on a staff reduction last year so this would not appear to be an isolated attempt to dilute it's operations.

I would also urge those of you who are members of other membership organisations to pass on these concerns to your organisation and it's membership. These proposals are being implemented as we write and I would urge you to act quickly.

With best wishes, THE NPA

Short Films on the film festival circuit, a view from one film maker... Chasing Cotards
Six Lessons I Learned Making My First Feature
The phone rang, and from that moment, everything changed... PART 1
Top Ten Tips For Making A Contract, a Film Makers and Producers Guide
Short film opens doors in LA for Brit Film Maker
The mountain lies ahead and my feet feel heavy...

What's next for Gone Fishing?
Rules, principles and guides…