By Chris Jones on January 19, 2008 in Cast, Contributors, Crew, Premiere 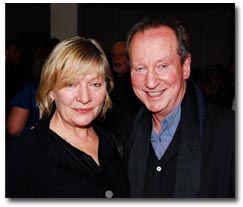 Over the last few days I have received over 100 congratulatory emails. Thank you to everyone who wrote, it was touching, and also great for other cast and crew members to hear just how much you appreciated the design, costumes, makeup, image, music, sound… I don’t have space for them all, so here are a few…

The production values are super high, it looks and sounds beautiful. The story was well honed and crafted so that twice during this short I caught my breath and had to totally re-evaluate what I had been expecting to happen. It’s delicious when that happens and a real testament to a well thought through plot. I am totally delighted with how the film turned out. It got a standing ovation and everyone smiled and laughed all night long at the party, the feelgood factor from the film was so infectious. I would love to see more people raising the bar on short films to make them as good as this.
Leilani Holmes 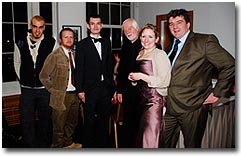 Saturday 12 January 2008 was a day to remember. The seminar should be saved as a template for all future film making seminars. That was "The" Seminar… Save it!!! Nothing but the love of movies could have prepared us better for such a magnificent premiere of a well crafted story in pictures, sound and music on to the silver screen – all in ten minutes, a showing that was so complete, it felt like it was the viewing of a full-length feature. With the benefit of persistence of vision, I declare, it was a complete success. And thanks to your hard work Chris, you made it all happen.
Emil Hazeley Wilson

Chris, many Thanks for what you are doing for the U.K Filmmakers. You make me believe that I can do it! So it is stop procrastinating and I have been planning for some time. "Gone Fishing" is a story well told, with a Superb Cast. Cinematic! Emotional! Captivating!
Johnny Roberts

The film was great – we wanted more!! Me and my friend were really impressed at the way you told the story in such a minimal way yet on such a big scale – if that makes sense?! It felt like we'd watched a much longer movie by how engaged we were with the characters / story. Congratulations!
Rachel Murray 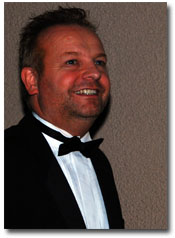 What a journey you have been on.  The standing ovation you received last night was a sign of the support you have from a huge number of industry colleagues and companies who believe that the talent and spirit you demonstrate in your film making is passionate and unstoppable. Although I played a very small part in the making of “Gone Fishing,” I was very proud to be sat in BAFTA being blown away by the superb surround mix that Andrew Stirk created at Videosonics.  I hope that you will consider that this film is just a stepping stone on the way to greater things and I hope that you remain as focused as you have always been in your hunger for great movies. I will always find it a great inspiration and honour to be working with you on any of your projects.
Adrian Bell

I've always felt that the film industry needs people to push it along. To keep the standards high and to keep the quality coming. Last night's screening of "Gone Fishing" was for me the archetype example of how the bar SHOULD be raised: how striving for quality yields results far greater than anticipated. The whole is more than the sum of it's parts type deal.
Richard Purves

An Epic journey, with dividends for all involved way above our collective expectations. A short film to watch for a BAFTA and Oscar 2009!
Damien Donnelly

Thanks for a wonderful Saturday – I am sure this event was one that none of us will forget in a hurry, least of all you!!  I woke up yesterday and wondered if I had dreamt the whole thing but fortunately not. This was even without seeing the film that was equally wonderful.  It managed to evoke so many different emotions and crossed a myriad of genres (tradgedy, comedy, action, horror, epic etc) in a relatively short space of time.  I remember laughing heartily and then suddenly being brought close to tears.  The emotive performances of Bill and Lynn were juxtaposed impressively by the youthful playfulness of Devon and James.  Each scene shared something different and sometimes it felt like there was a removal of the fourth wall and that we were witnessing something private.  This is a truly remarkable feat especially for a short film.  I am a firm believer that this film will do well and if it wins the Oscar for Best Film Short then this will be well deserved.
Brenda Smith 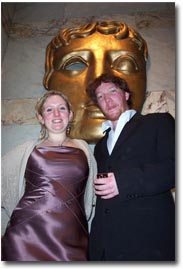 The night was a great success, and it makes you realise the sheer number of individuals involved (especially as I guess not everyone was there).  Sophie, my fiancée had a great time, and really enjoyed the film.  She was particularly impressed with the sound (and music) and quality of the picture – it does look beautiful.  For me, the one shot that really stands out is that initial shot just before the opening credits tracking back from Old Bill surrounded by photographs – very powerful.  We also met your mother, which was a great honour, and she was, of course, extremely proud of you and your latest film. So I wish you all the best with your bid for the festivals, and of course, the Oscars!
Phil Ashcroft

Blimey!Right. Enough self adulation, back to the graft and getting the film into some festivals! And of course, the feature films…

Casting: Top Eight Tips For Nailing An Audition For A Commercial
50 Kisses Premiere Announced - Are you coming?
Star Wars: The Force Awakes European Premiere
Failing to plan is planning to fail... Film making success lies in pre-production
Two important lessons about running auditions and castings for a film
Subtitles for Festivals