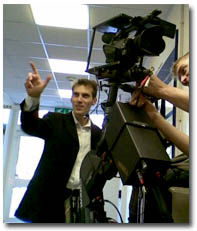 A few weeks ago, Simon Drake came on my Career Plan course, and after that, he (along with one other lucky film maker) won a two day seminar on negotiation, with top training company TNA Europe. On the seminar I ran, we established that negotiation skills was one area most film makers are not very good at – sure we can persuade people to help, but when it comes to harder deal making, we are ill equipped – so it was incredible that Simon would get this chance to go directly to a £1,250 seminar! I asked him to share his thoughts with us all…

'After spending the night in a very Fawlty Towers esque hotel run by a dotty old woman in Henley on Thames, I headed to The Henley Management hotel in the poshest taxi I'd ever travelled in. It was a beautiful and considerably larger building than I thought it would be. I wasn't sure what to expect when I got there. Would it be a massive seminar with hundreds of people in a room with some yawnsome presenter droning on? Would I be bombarded by a load of bewildering management speak by business people for the next two days? I really didn't know what it would be like.

I picked up my Living Spirit name tag and headed to a small conference room with a unobtrusive curved table and a rather tired but friendly looking Belgian called Michal Zieba (he was clearly jetlagged).  We got started by introducing the person to our right after getting their details. Then went onto discussing left and right brain people (left side is more analytical, right is more creative and free thinking. It was very interesting, especially when we looked closer into the "4 quadrants of brain"

And which ones we were (I was mostly C & D… mostly) The best part of this was that we learned the best practices to approach A & B people (lets face it, they are the money people) from a C & D background and successfully communicate with them. With some funky plastic cards we could keep about different tactics, negotiation techniques and communication techniques that were very helpful.

After lunch we had to negotiate a fictional house sale. This took me a while to get my head round as I have no experience relating to house purchases (I rent) and/or business negotiation, but it was a real learning curve and I got a lot out of it. It was one of those situations when you wish you could have another go. "If I knew then what I know now" etc…

The first day was ended by watching a video by Dr Robert Cialdini (who I, rather embarrassing, referred to as Dr Kildare) who is an expert about the psychology of persuasion. It was very interesting (if a little long) and got me thinking of ways of using his tactics to raise money and network for film finance and jobs.

The second day our speaker was an excitable and fast talking South African woman called Linda Macaskill. We were thrown straight into a role-play where the negotiations just collapsed. Once again (much like the house purchase role play the day before) it took me a while to get my head round it and when I finally went "Oh, I get it…" we were beyond the point of no
return. D'oh! Luckily we managed to not lose our five quid as the other team took pity on us, but it taught me a brilliant lesson (and once again I was left thinking 'I wish I could do that again')

We moved onto 'body language' after that, which was very interesting. Anyone who has travelled by public transport knows that there are many people who could do with learning some of these skills. We learnt about standing too close (I've noticed it's normally people with bad breath that do it!), excessive pointing, arms crossed in a defensive way, eye contact etc. It was good to be able to spot/apply in day-to-day activities as well as in a business meeting/negotiation environment.

The final afternoon activity was the group splitting in two and having to negotiate for a formula 1 driver. It was filmed, then we watched it back (gulp!) and analyzed our strengths and weakness. Even though sometimes it can dent your pride (I had a nervous grin plastered on my face and making pointless notes like I was one of 'The Dragons' in Dragons Den instead of listening to anyone) I would much prefer to hear it being told like it is, because that's the only way I can change the weaker parts of my behaviour. In the same way I like to get 'honest' (i.e. harsh) criticism on things I've written or made, as you can identify what needs a polish and what doesn't (although I hope this blog isn't going to be ripped to shreds…)

At least I looked relaxed on camera, and didn't cross my arms or yawn… and we succeeded in the negotiation. And that was that. I did the exchange of business cards/email addresses. Then headed off to my Fawlty Towers hotel where I had to negotiate my bill as they'd got things wrong. So if nothing else, I saved £20 off my bill…

When I went in that Thursday morning I didn't know what to expect, or whether I'd like it. But I was looking forward to it because I was pretty green when it came to the business side of things, and knew the only way to learn it was to learn it. It was out of my comfort zone, so I felt compelled to throw myself into it. It was interesting and surprisingly fun. It got me thinking about the process in a slightly different way. And not feel ashamed or embarrassed about focusing on 'the numbers' as well as 'the craft' Because I think an ideal partnership of making films (which as we all know is a costly business) would be someone who understands both processes, the film making and also the business/admin side of it as well. And can communicate to both parties.

I would recommend the course to any up and coming film makers as it was really eye opening in terms of the finance / negotiation side of things. I'm sure most film makers are fairly confident with pointing a camera at things and 'making' a film however balk at the prospect of going out a dealing with money people who don't care how great your underlying metaphorical subtext is, or what actor you've managed to get, all they want to know is 'how much and how much will I get back' (I know I felt like that, I'd go a bit cross-eyed whenever money was mentioned).

However it's one of those unavoidable necessities, so why not learn how they communicate and get the most out of them?

I'm already planning to go on another seminar by the same people in June, as I see it as the steps to take to make my film and know I'm still a long way from learning what I need to learn. Now I've come to see it's another piece of the pie, it's not something that has to feared or bored senseless by.

All the best and thanks for the opportunity to do the course,

Blimey! Thanks for your feedback Simon

The Great British Pitchfest ~ You're In The Room!
Joseph Lidster & Louis Savy: Top Tips For Writing Great Sci-Fi #LondonSWF
One Create50 horror story of how a writer lost their script… completely
Day Of The Flowers, true Brit crowd pleaser attracts critical acclaim
The British Screenwriters' Awards 2017 #LondonSWF
‘50 Kisses’... and the winner is...