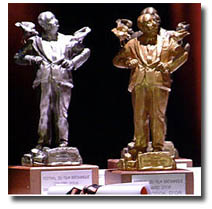 I am packing now as tomorrow am I fly out to Dinard (France), to the film festival. Every year a large chunk of the British film industry jump onto a chartered plane and head of to Brittany, for the festival – it’s a British festival in France you see.

I am an official guest of Kodak and Gone Fishing opens the festival, screening out of competition. I have been told that it’s a lovely and intimate festival, so I hope I can get a chance to take some time out and watch some movies. I also intend to start work on the next draft of Rocketboy – maybe the sea air, French atmosphere and great coffee in the mornings will create the right vibes…

I am looking forward especially to tomorrow as Gone Fishing DP Vernon Layton will also be there as he is out in France shooting photographs for a client right now – so the timing worked out well.

Nine personal and shocking experiences that reflect the terrible underbelly of SOME film f...
Canon 5D MkII versus Film in the real world… the result?
Watch the short film that catapulted director of Blade Runner 2, Denis Villeneuve, to the ...
The number ONE reason I encourage filmmakers to go to film festivals
Day 1 at Incubate in Tilburg
Mankind Is No Island, Interview and Film

Thousands of miles in 27 hours…
The Dinard Film Festival