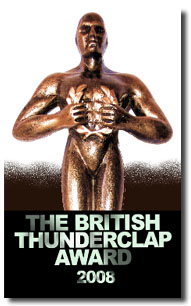 I just received this email…

Dear Nominees, the votes for this years British Thunderclap Award, of which you were in the Official Selection, have now been checked and counted.

We had a tremendous response with people from many corners of the world visiting us at www.thunder-clap.com to register their votes for all the films in the Official Selection.

It is very clear that the public are looking for something much more than those films which are usually served up in our cinemas and that British independent films have a life, a market and a strong and enthusiastic audience of their own.

The British Thunderclap Award was set up to find and publicly recognise the director who, as voted by the British film audience, is producing the most innovative or interesting work in British independent film. Be it in features, shorts, documentaries or fiction, we aim to reward the director who so clearly stamps his or her own individual identity, creativity and vision on an independent film, regardless of budget or professional standing.

It gives me great pleasure to inform you that the top four places in the British Thunderclap Award for Best Director 2008 are:

In 1st place with 49.85% of the vote and taking the title
British Thunderclap Award, Best Director 2008: Chris Jones
"Gone Fishing"

We would like to congratulate the directors of all seven films in this years Official Selection for being part of The British Thunderclap Award 2008: Vito Rocco, Ben and Chris Blaine, Paul Taylor, Mark James and Phil O'Shea, Jan Manthey, Franny Armstrong and of course Chris Jones.

Once again, congratulations to Chris Jones and to all of you for your valuable commitment to film making, for being part of The British Thunderclap Award and for enabling the public to choose their winner and support British independent film.

Blimey! So thank you everyone who voted for Gone Fishing, can you believe we secured nearly 50% of the votes. PEOPLE POWER!

I also wanted to mention the Blaine Brothers whose film, Hallo Panda, came second – these guys are real stalwarts of the Indie scene and I was honoured to share the competition with them.

Next is the British Independant Film Awards on Nov 30th, then the BAFTA and Oscars nominations (fingers and toes crossed)… IT'S GETTING VERY EXCITING!

On another note, I also discovered this very nioce write up on co-film maker David Bowen’s blog.

2 Responses to The Thunderclaps for…