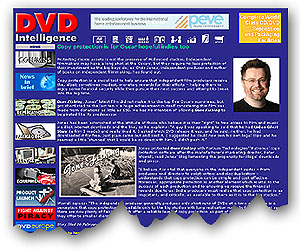 I have just arrived at the Sedona Film Festival in Arizona, and will be letting you know how it akk goes…

On the flight over, I have been working on a feature for MovieScope magazine about piracy. It’s not going to be the usual ‘outrage at copyright theft’ and ‘how to stop pirates’ article, but a more holistic look at the current situation and how I feel we need to evolve as both corporate creators of material, as well as avid (and fundamentally honest) consumers. It’s shaping up to be a really fascinating perspective. Of course I am going to look at traditional ‘copy protection’ too, and below is an article about Gone Fishing that just appeared online on a professional video site called www.dvd-intelligence.com

Copy protection is for Oscar hopeful indies too

Protecting movie assets is not the preserve of Hollywood studios. Independent filmmakers may have a long shot at the Oscars, but they require no less protection of their investment as the big boys do, as Chris Jones, independent producer and author of books on independent filmmaking, has found out.

Copy protection is a crucial tool to help ensure that independent film producers receive the, albeit sometimes modest, monetary rewards for their efforts – helping them to enjoy some financial security while they pursue their next success and attempt to break into the big time.

Gone Fishing, Jones’ latest film did not make it to the top five Oscars nominees, but got shortlisted to the last ten – a huge achievement in itself considering this film was made from donations as little as £50. He has no intention of allowing Gone Fishing to be pirated like its predecessor.

Jones has been astonished at the attitude of those who believe it is their “right” to free access to film and music via illicit internet downloads and the like, as he explains: “A guy I was speaking to said that he had Urban Ghost Story (a film I made) and really liked it. I asked which DVD release it was, and he said, neither, he had downloaded it for free. Just plain came out and said it. I suggested he could now own his own legal copy and he seemed a little ‘stunned’ that I would be so direct with him. I didn’t push it.”

“I believe it is vital that everyone in the independent sector – from producers and directors to script-writers and disc duplicators – understands that copy protection can be simple and cost effective. Moreover, appropriate protection is another element which is vital to the success of each production and to ensuring we receive the financial rewards due to us. Indie producers must realise that copy protection is as important, and critically, as available to them as it is to the big studios.”

Worrall agrees: “The independent producer generally produces only short runs of DVDs at a time and there is a perception that copy protection is available only to the big studios with long replication runs. In fact this is not so; there are now plenty of facilities which offer a reliable level of copy protection as part of the short run duplication they offer to smaller clients.”

In the next dew days I will add to this perspective with an interesting look at how material is ‘re-used and remixed’, and ask, is this actually fair use or copyright infringement… The rabbit hole goes so much deeper!

DIY mass DVD Duplication
Subtitles for Festivals
How To Make A Film Part 2 in Total Film - Out Now!
Everything is negotiable, my Total Film article part 1
Nothing is constant, except change… The death of Prime Video stores
Total Film Three Part Feature

Email from a previous delegate on the Masterclass…
Sedona International Film Festival IS A HIT!

One Response to Patronus Protects DVD's from piracy…