By Chris Jones on August 14, 2009 in Guerilla Film Makers Handbooks 0

One of the great things about writing the Guerilla Film Makers Handbook is that I get to meet and interview loads of amazing film makers, and they all have incredible journeys to share, and tips to offer like the one above. Yesterday I spent the whole day chatting with three groups of Brit film makers, and filming them for the upcoming Guerilla Pocketbook. We shot at the Roxy Bar and Screen in Borough, which provided a suitable red crushed velvet background and spent over an hour with each set of film makers.

First up were two guys, Seb Smith and Dave Bryant, who had made a DV horror movie called ‘Dead Wood’ (with their third partner, Richard Stiles), on what they referred to as a nano-budget – basically zero dosh. 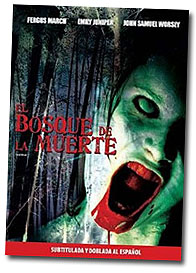 Shooting with a crew of three and a handful of brave cast members, they ventured out into the dark woods and shot for 11 days, then spent the next two years editing, reshooting, editing more, doing special effects, sound mixing and generally learning their craft as film makers – what is exceptional about their case study is just how technically excellent their film is, and indeed, their whole presentation of the final product – be it their website, press pack and DVD artwork. The upshot? Lionsgate contacted THEM! That’s right. They didn’t even get to a sales agent as their dream distributor called them and said ‘we want your movie!’ They did a deal and walked away with a large wedge of cash in their pocket – and then other international distributors jumped on the bandwagon too (‘if Lionsgate bought it, it must be good…’), even resulting in a UK DVD release.

By their own account, the boys concede that there were problems with their script, and I would add that some of the performances are a little stiff in places, hampered even further by the need to re-record dialogue in post. BUT… it’s a nuts and bolts horror that does what it says on the tin. They learned huge amounts and have become technical experts too. It cost peanuts to make…and most importantly, they sold it to a major US distributor, got huge kudos from that deal, and walked away the whole project in the black. There is much to learn form these guys.

If you have done the Gone Fishing workshop, you will know I spend a good hour or so on building a four step career plan, and ‘Deadwood’ is a classic ‘Stage 2’ film, a film they could walk away from but learn huge amounts. Now there are in ‘Stage 3’, ready to make the career launching film, and behind them, they now have allk that great experience of film making and distribution. I for one will be watching what they do next with great interest.

The boys offered many more tips too, all of which will be detailed in the new ‘Guerilla Film Makers Pocketbook’.

More about the other film makers we interviewed will follow over the next few days.