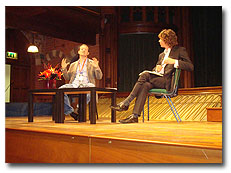 Day two of the Cheltenham Screenwriters Festival began with my old buddy, Peter Bloore, interviewing Simon Beaufoy on stage about his experiences as a screenwriter, specifically in the arena of script development and working with others, a place where a film can often derail (or the writer can be asked to leave the project).

He spoke at length about his earlier films, some of which were re-written by others to the point where he became very angry (at the time). But with perspective, he has realized that screenplays are more malleable and collaborative than he first thought. Here are some of his observations with regard to collaboration, in no particular order…

1. Most people he has worked with are very bright, even if at first glance, their ideas do not appear to be good. He also knows that everyone has the same end in mind – to make the best movie possible. It’s easy to demonise and become enraged when others interfere and threaten to ‘spoil’ your work, but it is part of the process, and needs to be embraced. They are after all paying for it.

2. Momentum is key. It’s important to avoid becoming entrenched or to hit the brakes. If you don’t agree with a point, admit it is ‘challenging’ and ‘will need some careful thought’, and move on. Do not disregard anything out of hand, or the project could falter and you may be asked to leave.

3.  Ask for script notes ahead of any meeting and insist that they are typed up and all on one single page. As soon as anyone has to write down their notes, the process focuses the mind and the notes become clearer (and maybe even self edited before they go to the writer). Keeping them to one page forces people to get to the point. The notes may also be badly phrased, but it’s your job as a writer to move past emotive and infuriating phrases and ‘hear’ what is really being said.

4. You do not need to incorporate all notes given to you. As a rough guide, maybe 60% will do (of course this may vary wildly).

5. It’s important that everyone in the room feels that they have in some ways won their point – of course this can’t be all points, but some of them. Peter Bloore added the old negotiators maxim that ‘everyone should feel they have won 60% of their points’.

6. Having said all of this, there is a point at which you might need to walk away. It’s hard to be specific, but there is a thing, an essence, perhaps even a ‘soul’ of the script that must be protected by the writer.

All good stuff and much of it echoes many of my own experiences ‘in the room’. What resonated most for me was this idea of collaboration in order to maintain forward momentum. I have had experiences where I have objected and the project died, or I embraced ideas and we went all the way.

It’s all important career stuff and certainly not in many screenwriting books.

The rest of the day I bobbed in and out of other workshops, found myself on stage as part of a panel of film makers discussing the notion of just finding some resources and making a film with what you have. It was an entertaining session, but by now I could feel that most of the writers in the auditorium were reaching information overload and thinking more about getting to the bar than funding their own movies! 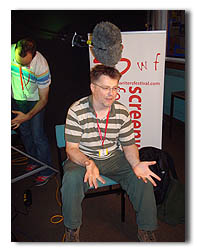 The day was rounded of with an interview with Sky TV for their ‘Movie Geek’ show which will be aired on November 7th on Sky One I believe. I hope I make it to the cut as there were a whole host of big name scribes pontificating and prevaricating on the art of the screenwriter, where I was just chucking in cheeky tips and tricks! We will see on November 7th I guess!

I am back in London now, and exhausted.

The Festival is still running for two more days, and already I am wishing I could have stayed those extra two days.

How Actors Can Radically Improve YOUR Script
Rocketboy act three turning point and the deep wounds inflicted
What is happening now is less interesting than what may happen next
Short Films on the film festival circuit, a view from one film maker... Chasing Cotards
Echoes in eternity: In conversation with William Nicholson at the London Screenwriters Fes...
Robert McKee on Dialogue, Story and Being a Writer, Podcast