Having an open and frank conversation with young people is always a challenge. And that’s what I did today, at the Barbara Speake Stage School – with a group of about 50 or so aspiring performers, aged between 11 and 15… A long and deep chat… about wizardry!

That’s what I believe we story tellers do – we are wizards who cast spells on our audiences, and when we get good at our wizardry, we can hold audiences in that deliciously magical state for the duration of our work (Jack Bauer in '24' manages a whole day!) 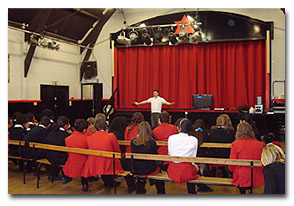 Of course actors are on the front line of such sorcery, and having the privilege to speak to these guys at such a formative age was both exhilarating and nerve wracking. I had just one hour which I filled with anecdotes and hard won lessons I have learned on my own journey – about taking courage to commit to an extraordinary adventure, about learning to pick yourself up after repeatedly being knocked down and often kicked in the teeth while down, about helping pick up others when they are knocked down and thereby building a band of brothers and sisters… But most of all, we spoke about the magic that is created when your work powerfully connects with an audience and both transports and transforms the viewers in such a way that they live the vicarious lives of the characters in that work.

It went down a storm I am happy to report!

I also screened ‘Gone Fishing’ to them and got a few ‘ahhs’ and giggles in places I did not quite expect. It’s always a gift to screen your film to a young audience as their reaction is both honest and unrestrained.

At the end, I was mobbed by a sea of red jumpers, all shaking my hand confidently and asking to join my Facebook page! One particularly plucky chap asked if I could introduce him to Megan Fox! Ah, what it is to have ones dreams and aspirations unrestrained.

A great day and for me a terrific mid-week-pick-me-up as it helped re-connect myself with WHY I put myself through this job, day after day.

Now, back to the script…

Gone Fishing, the festival data is complete!
Have you made a 'film' or a 'movie'?