Santa came early for me this year. I was given a shiny new and lovely Apple TV as a gift from Lucia, and I am rather excited! I asked for it early as I wanted it up and running before Christmas so that if there was a problem, I can get it sorted before everyone disappeared.

For those of you who don’t know what Apple TV is, for my money, it’s the first real attempt at the future of film distribution in the home – one device delivering all media – video, film, internet, music, photos – that will sync with all my other devices – AppleTV for your TV and living room hi-fi, and iPod / iPhone for music and movies on the go etc.

Hold on a moment! Let me be clear. This is a first attempt into this bold new market and technology – Apple TV is still, in my view, way too limited for most people. Still, I needed to see it in action for myself.

So what is it? As it’s from Apple, it’s a small and beautifully designed small silver box, with no buttons at all. The software is intuitive and extremely well integrated. It syncs with iTunes on my computer and makes all my music available, as well as videos, in the living room (using the home network to sync up). It also streams Quicktime HD so I can rent and watch films at ‘HD quality’.

OK, so here are a bunch of my findings, in no particular order. And let me also be clear, I am not an Apple evangelist. I am a PC guy day to day, so I am immune to the enamour some Mac folk feel when they get close anything Apple designed. 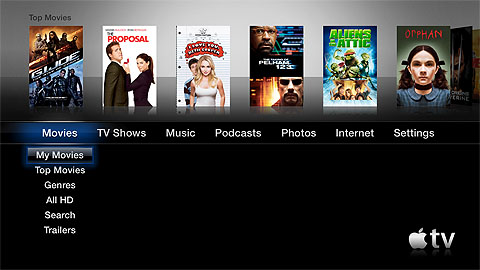 1. It is a stunning piece of design technology. But it’s also expensive at just over £200.

2. I connected it up via HDMI to both a 1080P TV and 720P projector. The Apple HD video files are in fact, 720P upscaled to 1080P. The pictures and the operating system looks good on a TV, not so good on a projector.

3. Sound is as good as an iPod. I am sure audiophiles will balk, but for me, it was completely acceptable.

4. I can download a film and start watching within a minute or so of the download starting. There are no stutters or glitching. It works flawlessly (though I do have a fast broadband). This is a real winner as it could spell the end of trips to Blockbuster, with no more messing around with LoveFilm and no more limited choice from Sky.

5. I have figured out how to operate two accounts – one in the UK and one in the USA, so I can buy and download from both countries. Very cool (though naughty).

6. Many films are available in HD, even older classics, which is awesome.

7. The remote is small and lovely, and proves to all other manufacturers, you don’t need enormous black bricks covered with so many buttons, it terrifies most users. Excellent.

8. You can watch a trailer for any movie you want to see. Brilliant.

9. It includes short films, and we hope Gone Fishing will be on Apple TV soon.

1. It can use WiFi or a cable LAN for the network. I found WiFi to be interminable, and ended up buying a couple of Home Plugs that use the electricity socket in the wall to transfer data (from eBuyer here). It works really well and is about three times faster than my WiFi (which was already fast by WiFi standards).

2. The amount of films and shows available is quite good, though I would have hoped for more. It’s kind of like how it was for the first few years of DVD, with huge gaps in what’s available.

3. Films are a little more expensive to rent than I would have liked. And I would never buy a film to keep on Apple TV, I would buy the BluRay.

4. It’s surprisingly noisy, the hard drive spinning makes a louder noise than the ‘near silent’ operation I would have expected.

5. It get’s VERY hot, all the time. A result of it never being switched off (see below)

6. There are big differences between the USA and UK iTunes stores – with both countries offering a mixed bag of films, sometimes available to rent, sometimes in HD. All in all a little inconsistent.

1. There is no ON /OFF switch. Not even a software standby that actually works. You simply cannot switch this off without yanking the cable out. This is completely ridiculous in 2010 and wholly unacceptable. It draws 28 watts when active, and 14 watts when it’s in ‘standby’ (which just turns the screen off, but the hard drive continues to spin). I am quite angry about this stupid omission in the quest for ultra design aesthetics or nonsensical ‘always in sync’ arguments. Have they not heard of global warming?

2. You know on balance, the films are too expensive to rent! Apple TV should be comparable to Blockbuster – ‘Moon’ cost me £4.50 last night, and that would have been £3.99 at Blockbuster, and much cheaper if I did one of their deals they regularly run (like rent two, get one free).

3. There is a rental gap too. Many new releases are only available to buy in the iTunes store when they can be rented at Blockbuster. Sure it’s only a few weeks to wait, but it’s enough to drive me back to Blockbuster. Silly.

4. Picture quality is disappointing. The HD films are better than DVD, but not hugely. They are not as good as BluRay by some distance, though I accept I am watching on a projector and I also have a spinning propeller on my head. Lucia did not notice it., she thought it looked great

5. There is no real control over contrast, colour or saturation. Instead Apple helpfully explains that I need to make the changes on my screen. Personally, I find the encoded media to be consistently dark and contrasty. Not so much as it’s unwatchable, but enough to bug me. And there is no way I can raise those black levels, no gamma controls, in fact nothing aside from a blunt ‘RGB high’ or ‘RGB low’ setting (helpfully buried several clicks down in a menu so I cannot compare a one with the other quickly. This is a limitation of Apples minimalist approach to everything it does.

6. It’s surprisingly hard to convert your own home films to something Apple TV likes. This may be easier on a Mac but it’s not so easy on a PC. I can manage it, but it’s certainly no ‘one-click’ solution that most consumers exepct.

7. The internal drive is not expandable and a little miserly, though it’s true, Apple TV is really a media extender, so your films and music will remain on your main computer and stream on demand. I would rather have it all locally stored on Apple TV.

So all in all, an excellent product, with a couple of dumb design flaws, and an as yet, limited availability of films which are sub BluRay and overpriced. A premium product, just a moment ahead of the curve…

Being able to access the US store (if you know how – I just watched season 3 of Mad Men for instance) is REALLY great, and you can’t underestimate just how convenient it is to download and ‘watch immedia
tely’.

I can see that very soon, someone like Amstrad or Sky will surprise us all with a cheap box that does all that Apple TV can do, and more, offering a service that is consistently cheaper, with more films, and more bells and whistles. If I were them, I would be giving those under TV boxes away free to grab this market right now.

This is definitely the future, but Apple needs to work a bit harder if it wants to have the impact and saturation of the iPod. I am not sure they are prepared to do that, but I hope they do!

What is REALLY exciting is the opportunities a device like this presents for Indie film makers – one device, all mediums (including home cinema), and one robust (and we hope honest) distribution network…  This kind of technlogy changes forever the way we will distribute our films.

Which email service should YOU use to stay in touch with your group?
Remember to switch off vibrate!

1 Million Downloads is the target for cellphone short that will touch your heart…
EXAM gets a four star review in Total Film, released in theatres on Jan 8th!

5 Responses to Santa has brought me an Apple TV!

Leave a Reply to JJ Click here to cancel reply.