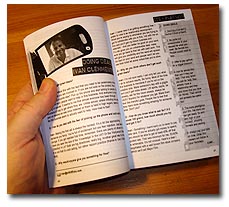 I am in the final furlong now…

The deadline for The Guerilla Film Makers Pocketbook is February 8th, and it’s all hands on deck in the Living Spirit office. I printed the book out last Friday and was horrified at how many blank pages I saw, and how little time remained. And so, I engaged my ‘laser sights’.

One of the keys to success that I have isolated (while interviewing hundreds of other film makers for The Guerilla Film Makers Handbooks) is what I call ‘laser vision’. It’s a kind of ultra focus on a single thing. When people get this ‘laser vision’, the impossible quickly becomes a daily event. I have experienced this myself many times, and seen it in others. For me, right now, laser vision is going to get me through the next fourteen days. It’s a great tool for completing a project. It’s also a great tool for starting a project and getting momentum very quickly.

A film maker I have been following on Twitter who has this laser vision is Danny Lacey, who has a site here. He is going for it in a small, consider, but BIG way!

To echo this approach, I am reading a short book right now which was recommended to me by an American film maker, Susan Cohen, who I interviewed over Skype last week. It’s called ‘Ignore Everyone’, by Hugh MacLeod – the first few chapters are on the authors website at www.gapingvoid.com (I am sure many of you will have already either read it or heard of it). Chapter One in this book, which also takes the books title, ‘Ignore Everyone’, is another expression of ‘laser vision’. MacLoed gives his unique and insightful spin, but it’s ‘Ignore Everyone’ and ‘Laser Vision’ are fundamentally the same ideas. You can read his chapter here, and I recommend it.

One thing that I am increasingly finding that I am concerned about it that of the interference from my connectivity and networks – phone calls (now that I have a cellphone, home land line, office land line and Skype), as well as email on my computer and iPhone, as well as MSN messenger and Skype messenger, mean that I am more connected than ever (and as a side thought, it seems that 15 years ago, when I had just one land line, it cost a lot less and I got a lot more done!) Whenever film maker Simon Cox comes to work in my office, he always comments on the number of emails I get – EVERY HOUR!

Social media is an especially worrisome area for me, especially Twitter. Don’t get me wrong, I love it.  I tweet, I read tweets and I respond to tweets. But am I the only one out there that gets the feeling that there is a great party going on somewhere in the Twitterverse, and somehow, I am just too busy to attend? You see the great killer of ‘laser vision’ is distraction, and Twitter is the mother of distraction! Sure I have managed to get great answers from Twitter in the past, make amazing discoveries and build relationships… all good stuff. But it is also so darned addictive and distracting. Deep in my gut, I fear that many film makers, myself included, may be tweeting to the converted in the hope that it will lead to that ‘killer opportunity’ or ‘nugget of info’ that changes everything…

Twitter is here to stay. For sure. It’s a great tool and lot’s of fun. I just hope that I find a way for it to help me better tell great stories…

2 Responses to Focus for success and Tweeting to the converted…