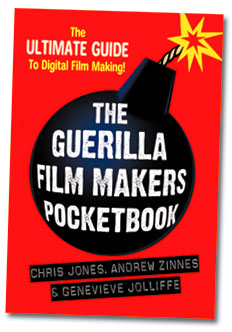 So I have two days left to complete the new Guerilla Film Makers Pocketbook, and goodness, we are on schedule! How do you like the cover?

Today I have been editing a long interview I did with Philip Bloom, about shooting on HD DSLR cameras – below is a short podcast from the full podcast which will be released soon (when the book is released). Here Philip talks about using ND filters and the value they have.

NOTE – The full podcast goes live when the book is released (if you sign up you will get an email when it goes live). Sign up here

I tweeted about the interview and how these cameras represent an astonishing bang for your buck, and how personally (depending on the project of course), I would choose them over the Red camera or other high end HD format.

Why? Well you can buy one, lenses, and all the bits you need for around £5k!

That’s a lot of money sure. But the equivalent Red package is nearing ten times that price. Sure there are problems with the 5D, sure there are limitations, but there are problems and limitations with EVERY camera, and that usually starts with the price (both purchase and rental)! From where I am sitting, I can’t see any other camera system that offers similar quality for even a fraction of the price. For an indie film maker and entrepreneur, that has to be something worth serious investigation. If you haven’t seen any 5D footage, check out this film shot by Philip, and marvel at the low light photography and cinematic depth of field. Gorgeous!

After interviewing loads of film makers for the new Guerilla Film Makers Pocketbook, the usual trend that I have seen with many other film makers emerged once again. That’s Pickups and Reshoots, and how essential they are to the success of your film.

We all begin with the idea that we will shoot our movie in eight days, two weeks, three weeks, whatever it is. But we go over schedule and over budget. Then we have reshoots to fix problems. Then we have pickup shoots to fix other problems in the edit. And so on. And when you are out of money and need an expensive camera hire, you have a problem.

All in, what seemed like a good deal for a one camera system for an eight day shoot, quickly becomes an albatross as you can’t afford to re-rent the camera kit. The upshot? You find yourself stuck in post production, or worse still, you don’t do the extra shooting needed and just complete your film, leaving problems unfixed.

This is where owning your own kit really does offer a real advantage. I have personally shied away from owning kit before as I never saw anything that rivalled the look of 35mm that was affordable.

That’s all changed with the Canon 5D and 7D.

One other hidden problem with the Red camera (and the other high end HD cameras that shoot to drives) is that of data management. Shooting on Red creates HUGE amounts of data. Fine if you are setup to handle it and you really ‘get’ how to manage post production, but for many new film makers, this is a minefield where there will be casualties (loss of data = loss of shots) simply because they can’t handle terabytes of data. It’s bigger than you think, takes longer to copy than you think, and usually gets done at 4am by an untrained assistant. (Doh! Where did that shot go?)

Even managing data files shot on a 5D or 7D is a headache, and they are a fraction of the size of Red files or other ‘pro’ camera systems. But for me, I think it is manageable.

So I am pretty sure that in 2011 at the Cannes, Venice and Sundance Festivals, maybe even the Oscars… we are going to be seeing films shot on the Canon 5D and 7D.

I hope so because I think these Cameras are as big a deal to Indie film makers as DV was ten years ago and HD was two years ago… These cameras are game changers.

To get an email when the full hour long interview with 5D guru Philip Bloom goes live, join our newsgroup here or our Facebook group here.

Listen to the Filmmakers Podcast and get film and screenwriting tips
Grading 5D Footage With FCP and Colour
Tactics To Get Produced: Podcast With Prolific Brit Producer Paul Webster
The Three Pillars Of Successful Low Budget Horror Film Production
Inspirational Podcast: Editing 'Mission Impossible' with Eddie Hamilton
John Cleese Podcast Lecture on Creativity and Originality: The 5 factors that you can arra...

EXAM is up for the Empire Awards… PLEASE VOTE!
My Trip To Skywalker Ranch… ANOTHER FREE Canon 5D Podcast