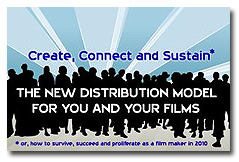 It’s only a few days now before our distribution in 2010 workshop – and there are still places left if you want to come. Full details here. And if you want to see Sheri and Jon in action, check out the video above.

For now though I thought I would bring you some more hot tips from Jon (below), who is our star attraction at the workshop. Also, we have firmed up a whole mountain of other guest experst who will be speaking. It’s really turning out to be an AWESOME event and will not be repeated this year. So take action and gain full control over the success of your film and your career. Click here.

OpenIndie-Kieran Masterton
A website where anyone can discover films they’re interested in, request a screening in their area and put on a screening of any film on the site. Likewise, filmmakers can add their film to OpenIndie and upload and promote their film via social media. Founded by DIY distribution pioneer Arin Crumley of FourEyed Monsters fame. http://www.openindie.com

Good Screenings – Sarah Mosses
Film distribution service dedicated to showing award winning social justice films in conjunction with Channel 4 Britdoc Foundation. Anyone in the world can buy a license to screen films found on the platform. Screening hosts can then keep the profits for themselves or for organisations, campaigns or causes. Franny Armstrong's climate change film Age of Stupid was the first to utilize the platform. http://www.goodscreenings.org

Open Cinema – Christoph Warrack
Open Cinema is a nationwide network of film clubs programmed by and for homeless and socially excluded people. Each week participants watch the best in classic and contemporary cinema and work with professional filmmakers to create films of their own. If you are an artist who wants to give back to the community, Open Cinema provides a way to do that. http://www.openfilmclub.squarespace.com

Shooting People – James Mullighan
Shooting People is the world's largest network of independent filmmakers. There are over 35,000 members in the UK and US who share tips, recommendations and news, and cast their films using the nine Shooting People daily bulletins. Over 300 films each week are cast and crewed using the service.. http://www.shootingpeople.org

Jon Reiss’ Tip of the Day 7 – Differentiating Core and Niche Audiences
The terms Core and Niche are often used interchangeably and this is a mistake.  The niche audience for your film is that slice of the population that has a particular interest in your film or an aspect of your film. The core audience for your film is those people within each niche that are your most ardent supporters.  Those people who will spread the word about your film to not only their networks, but to the rest of that niche. You can have multiple niches’ that are interested in your film, and within each niche there is a core who combined adds up to the core of your film.

Jon Reiss’ Tip of the Day 8 – Engage Organizations to Promote Your Film – Step 2 of Audience Engagement is: Know WHERE your audience derives information/congregates.
Many niche’s have organizations that support those specific topics and interests.  Engage those organizations early in your filmmaking process (as early as conception and prep). It is important to have the proper attitude toward your audience and these organizations. You need to think, “What can I give them?” instead of “What can they do for me?” If you think of the former, the latter will flow. People are very busy. You need to give them an incentive to be involved with you. The film is not enough. How will the film service their organization, their lives and the lives of their members? In turn, they will help you promote your film to your direct audience. This has been used by great effect by documentary filmmakers. Narrative filmmakers need to follow their lead. 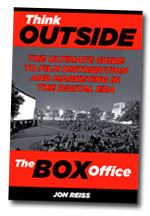 Jon Reiss’ Tip of the Day 9 – Create a Dynamic Website
Create a dynamic web site and do it long before your film is done. Old-style film web sites are out – blogging and a constant flow of information are in. Blogging and tagging is what the little bots out in cyberspace will recognize and bring you up in the rankings. Thanks to my wonderful friend and web site savior Michael Medaglia and a lot of great blogging by producer Tracy Wares, we were near the top of Google search on “graffiti documentary” even before our world premiere at Tribeca. A great web site also helps you cultivate your niche audience and further allows the theatrical to fuel your DVD release.

Jon Reiss’ Tip of the Day 10  Blog
Blogging helps in two ways: First, it drives traffic to your site as you link to new and interesting stories that are related to the subject of your film (For Bomb It, we post news about graffiti around the world.) And second, your blogging activity will help your site’s SEO (search engine optimization). This will result in higher search rankings for your film in relevant categories. What to blog about? Of course you should blog about your film, your filmmaking experiences and your screenings, but you should also consider blogging about subjects that relate to your film and your film’s audience. This will make your project relevant to them on a broader level and keep them coming back to
your site. One simple way to come up with information to blog about is to use Google Alerts. We received a weekly Google Alert about “graffiti” and “street art” and select a few top articles to blog about.

'Thanks for the tips Jon and more to follow. Remember you can sign up for the workshop here…

The Essential Low Budget Film Makers Sales Agent and Distributor Delivery List
How and why filmmakers get screwed, or screw themselves, in distribution (and how to avoid...
After years working in the real world finding my life rushing past me faster and faster, i...
How I Got My Feature Film On Amazon Prime and How Much I have Made
Film Producers Survey by Stephen Follows in the wake of the NPA collapse
Exclusive Interview with Christopher Nolan and Emma Thomas from our Guerilla Film Makers A...

One Response to Distribution in 2010, a film makers treasure chest of tips, tricks, strategies and new relationships