As the dust settles on last weeks show, which we felt was the best yet – and from your feedback, you did too, I thought I would share some of the comments we have received. 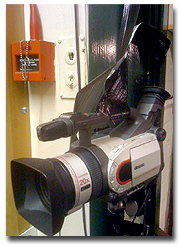 That we even managed to get the show on the road is a minor miracle as one of the cameras went down JUST 20 minutes before going live. Literally, it just died! Thankfully I had an old camera on a shelf which was quickly fixed to the wall and held in place with gaffer tape. This really reminded me of how close to the edge that we are surfing with the show. Just like a low budget feature, there is pretty much no backup plan or built in redundancy. Sure, we have planned for many outcomes, but, again, like a low budget film, we simply don’t have the resources to ‘buy’ that peace of mind. 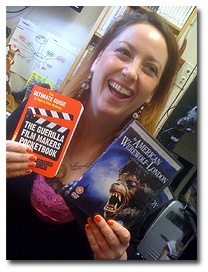 Also, a big thank you to Maureen Hascoet, our intrepid roving reporter and production co-ordinator, for her Ninja like mission to get Jon Landis on the show. She got to him at a top secret screening, gave him a book, got him to sign the DVD of American Werewolf (prize for the show) and even pitched the show to him! Apparently John was VERY nice to her, but was non committal about coming into ‘The Production Office’. But we wont give up just yet…

Remember, next weeks show should be live from Cannes, but right now I am stuck on Eurostar with a train broken down in the tunnel – so fingers are crossed!

‘The live interaction element was brilliant. We could ask questions to the guests and felt really involved in the show. It's great to hear how other film makers handle shooting low budget films, how they tackle situations etc. The Production Office Live! is an informative, interactive and compelling show. If you're a film maker then definitely try and schedule some time to tune in, you won't regret it!’
Adam T. Davis Editor/Director, London,

‘The Production Office is captivating viewing for anyone with a vague interest in indie movie making. Although I've dabbled with film production, I wouldn't call myself a film-maker. But after watching an episode of The Production Office I want to go shoot a full-on feature film! Very inspiring!’
Andrew Elias, Actor, West Sussex, tonched@hotmail.co.uk

‘Like a very good TV series, it's captivating to the extreme. I'm honestly glued to my computer screen during the whole show. I look forward to my Thursday nights in front of my computer screen and the chances of me getting any other work done during the show is, well… impossible! Great show with great guests from a production office that wants to share a wealth of filmmaking knowledge with an army of indie filmmakers and creative minds. To Chris, Judy and the team… keep up the great work! Danny Lacey Writer, director, producer, but above all… filmmaker.  It's a show about the process of making films, from grass roots level upwards. As a new, still slightly wet behind the ears, filmmaker, this kind of show is brilliant for my development. Hearing expert opinions on the various aspects of making a film is fascinating. I think it's really important to hold onto that core element of the show as the series develops. It's about the process of making indie films, viewed by an army of enthusiastic indie filmmakers and other creative minds.’
Danny Lacey, Film Maker, dannylacey@stadamedia.co.uk

‘Once again another fascinating insight from those who have done it and got the t shirt.’
Nigel Sizer, Film maker and Alligator Wrestler, riprods@msn.com

‘This is the first show I've seen and despite being unrehearsed I think Chris comes across as a very warm relaxing host/interviewer – very professional. The show reminds me of Swap Shop meets early Chris Moyles radio show. Relaxed, entertaining and technically accomplished. There is very little pre-record and the show has a great deal of character, and, characters.’
Mike Peter Reed, Outlaw Moviemaker, Hampshire, mike.peter.reed@googlemail.com

‘I wanted to say congrats on today's show. I LOVED IT. You and Judy work really well together – very very funny! You definitely have to keep this up as it's so damn good. Anyhow just wanted to tell you how much I enjoy it! And Well done!’
Genevieve Jolliffe, Film Maker, Hollywood
(note, Gen is actually on the show!)

'Mark's talk about his long journey to becoming a producer was inspiring, and his advice to 'take the stress off yourself', and pay the bills by some other means than filmmaking (which is precarious at best) was something to take to heart. Well Chris, you kept up your promise of not becoming too slick!!! Actually, last week's 'non-live' broadcast made it clear that you and the team do put in a lot of work & rehearsal before each episode, but it doesn't feel too rehearsed, and that live quality is very much present. Judy is rapidly becoming the comic foil (where do you go after "Balloon Hands"…), so there is never any chance of the show becoming too serious! From a filmmaker's point of view, it is the guests that make the show a must see item. All have given a real insight into their particular area, or illustrated their particular journey in a way that is really instructive to those watching – from pitching film projects in LA, to how costume can be key to an actor developing character. Ollie Lewington's pieces are incredibly informative as I am still trying to get my head around the whole social networking landscape. The programmes are definitely becoming a resource in themselves. When 'Rocketboy' is finally in pre-production, it would be brilliant to see the process up close & personal on a format such as this (though I suspect there will only be time for making the film, not both). Can't wait to see Eddie Hamilton guest presenting (though you are doing a great job, Chris). My only suggestion is that it's time a champagne company came forward to sponsor your celebratory cork popping at the end of e
ach show – or should that be a safety googles company for Judy… Keep up the good work!'
Andy Robinson, Filmmaker Exeter, Devon

Manifesting Success In Your Life and in Film Making... Time to re-consider your reality?
Inspirational podcast with writer Peter Souter - great tips, advice and insight for writin...