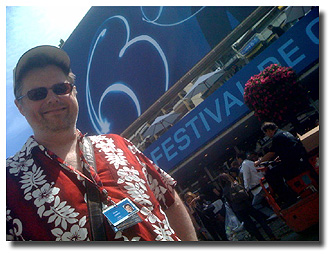 Thursday 20th May, 7.30pm UK time, on livestream.com/guerillafilm or the blog www.chrisjonesblog.com

We went for an Oscar and they all said it couldn’t be done!

We started a no budget TV show from our office when they ALL said it couldn’t be done!

Now we’ve put that TV show into a bag, hopped on a train and come to Cannes to shoot it Live from a great big giant yacht! And this time even we’re not sure it can be done but, by God – we’re gonna try! All we need now is a yacht!!

Will we manage to blag our way up the gangplank? Or will we have to settle for a lonely curb on the Croissette?

And rest assured that wherever we end up, we guarantee a wildly entertaining hour of insightful and in depth interviews with film makers and industry professionals alike.  Many of whom we’ve managed to grab on the hoof as we all dash hither and thither from meetings, screenings and parties.

We’ll take you along on a guided tour with our merry band of Cannes virgins who signed up to our workshop back in March and finally navigated their way through the ash cloud earlier in the week.  See how a bunch of novices get on as they dive head first right into Le Deep End.

Plus our usual mish mash of insights, tips, news, gossip and general chit-chat with a dash of Croissette chaos for extra flavour.

It’s tacky vs taste and decadence meets debauchery on:

Trust me, you REALLY don’t want to miss it!

PS – There is no competition this week.

The Guerilla Guide To Cannes!
Manifesting Success In Your Life and in Film Making... Time to re-consider your reality?
Cannes, A Virgins Guide
Short Guide To Attending The Cannes Film Festival and Market For The First Time

You Know You Are In Trouble When You Look Forward To Going To Cannes To Get A Rest…
'Robo Geisha'… Did I just hallucinate that? A Cannes 2010 short memoire