It’s going to be our BEST show yet! Tonight, 7.30PM UK time, ‘The Production Office LIVE’ will broadcast our fourth show from Ealing Studios, with guests, great competitions, movie making chat, tips and tricks. It’s an interactive show too, so you can GET INVOLVED!

While you can watch it on ‘catch up’ (for instance, Simon Cox's interview on Show number 3 is now available on 'catch up' here on the Livestream page)… 'Catch up' is certainly NOT the same as LIVE! Something our regulars know all about. And we now have viewers who consistently tune in LIVE from around the world – Australia (yes they get up 4.30 am, Mark and Simon THANK YOU!), France, Spain, Mexico, the US of A… we will do a quick survey on the show tonight to see just how far we are reaching. 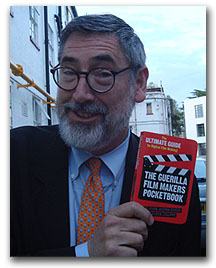 So the BIG news – we made a determined attempt to get directing legend John Landis on the show. And we nearly did it! And it might still happen too. But for now, we will all have to make do with this picture of him with the Guerilla Film Makers Pocketbook (taken yesterday), and we have a signed copy of the collectors edition of ‘An American Werewolf In London’ to give away on the show too. The whole story will be on the show.

We will also be showing some 3D footage shot at our book launch last week (watch the video blog here), with a detailed explanation of how YOU could shoot 3D with 2 Canon 550Ds – it’s possible – you could shoot your next movie in 3D! 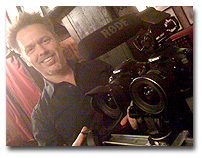 So get your anaglyph glasses ready.

Joining us in the office tonight are construction foreman turned production designer… turned Producer… Mark Sutherland. He will be speaking with us about his journey to producing his first UK feature film (while tiling roofs) ‘SUS’, out in theatres this week. Mark has a HUGE amount to offer emerging film makers, both in practical tips, as well as inspiration. It will be a cracking interview.

Also on the show is Costume Designer Linda Haysman, speaking about the creative and practical hurdles to overcome when working on low budgets. A costume is like the skin of the actor, and when we meet a character in a story, it’s the first thing we see as an audience. So getting it right is essential. Managing the costume department in both a creative and operational sense is a skill and craft little understood. Linda will give us the full low down. 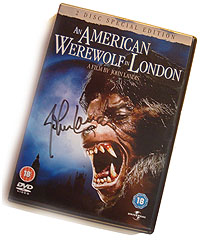 Competition! As well as the signed copy of ‘An American Werewolf In London’ we are thrilled to add a copy of Philip Blooms Canon 5D MkII training DVD to the LIVE competition. If you are shooting your film on a DSLR, this DVD, worth $100, is essential viewing. Remember, someone watching LIVE will grab this amazing prize tonight. Click here to watch a clip from this DVD.

Our super shiny and bright red mugs have finally arrived too. And they are fantastic. Everyone who sees them wants one! If you are considering becoming an Exec Producer of the show, now is the time to do it, and get exposure for your project on every show in this season. You can do that here.

Right! There is still so much to plan and do.

Here on the blog or on our Livestream page at…

Tune in early to get into the cat room. See you there!

The Production Office LIVE, film makers TV show for YOU… For Film Makers, By Film Makers, About Film Making!
A Pocketful Of Inspiration…