By Chris Jones on October 24, 2010 in Screenwriters Festival, Software, Technology 2 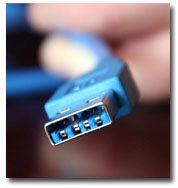 As part of the London Screenwriters Festival we will be filming some of the sessions. How these sessions will be made available in the future is part of a wider plan that, for now at least, I can’t quite reveal (I will very soon though).

In order to do this, we will need to able to shift MASSIVE amounts of data around very quickly, and so last week I bought three 2TB USB3 drives, each coming with a PCIe expansion card to install into a desktop computer (the drives cost £117 each from eBuyer). I have no intention of using the USB3 interface right now, I learned a long time ago, don’t perform upgrades in the middle of mission critical work. I just wanted these drives to be future proofed for much higher speeds later on down the line. What I REALLY wanted to be sure of though was that they did in fact work with USB2. And I can confirm that yes, you can just plug these USB3 drives into a USB2 socket (with the supplied USB3 cable) and get a fully functional USB2 drive. Of course when you plug it into a USB3 port, it will behave like a USB3 drive at significantly increased data transfer speeds.

This is great news as I will only buy USB3 drives now. And blimey, £117 inc VAT for 2TB! Amazing.

The Production Office LIVE is coming back! (watch the re-run now)
The Social Network? Hey we got our own!

2 Responses to USB3 Drives For Film Makers and Editing…. here at last