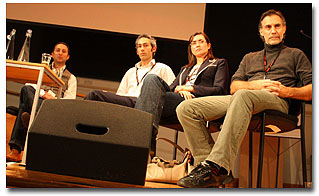 Right now the LSF2010 delegates are still filing out the exit survey – we have been asking about their experience so that we can improve the festival next year. So far the feedback has been both amazing and truly insightful. We plan to share a detailed breakdown in due course, but for now here are some of the broader stats and ideas.

Note – If you attended the festival and you didn’t get an email from us about the survey, there is still time to do it – drop me an email now and I will send you a link to the survey (mail@livingspirit.com)

These stats below are drawn from the 160 delegates who have taken the survey.

We are working on longer breaks for lunch and dinner next year. Taking that into account, would you say the sessions were…

1. About the right length
2. Occasionally a little long, but that's OK
3. Consistently too long
4.  Way too long 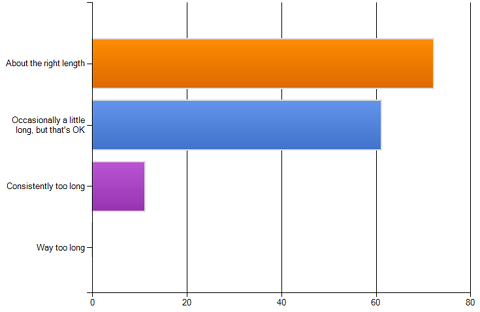 We had heard lots of opinions about the ideal length for sessions and we ended up choosing 90 minutes for 2010. This was supposed to be 60 minutes with Q and A. I personally felt that anything less would end up with sessions that were too lightweight. And it looks like most people would agree that the sessions were about right, perhaps occasionally a tad long, but that’s OK. Reading through feedback we also noted that some people wanted longer breaks, some wanted shorter. We also recognize that some sessions could be ‘double sessions’, Linda Aronson for instance. This was repeatedly asked for.

So here is what we are proposing for 2011. Sessions will be ten minutes shorter, so 80 minutes in length. Morning and afternoon breaks will be shorter at 20 minutes, but lunch will be much longer at probably 90 minutes. We will also work on making lunch a ‘networking’ opportunity and not just a refuel pit-stop. We will be publishing our new proposal for the ‘sessions timing throughout the day’ in the coming weeks.

What format would you like for next years festival? 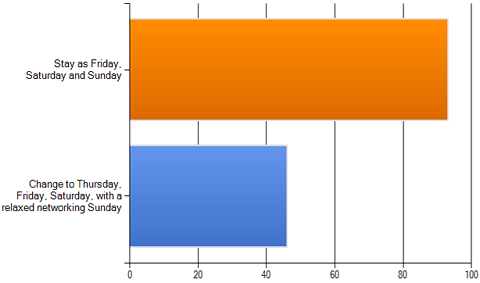 So we just didn’t know what you would want. As a festival with no strings attached, it’s clear that Thursday to Saturday with a networking Sunday would be best. But we live in the real world. Reading through feedback we could see that issues such as child care, taking two days off work instead of one, staying in London an extra day, all seemed to load the cost (in time and money) to most delegates. So right now, the plan is to stay with the majority vote at Friday through Sunday, but we do want to figure out some ways of adding more networking, possibly via a lengthier and more formal networking on Thursday night. More on our proposed solutions in due course.

Do you have one crazy idea that we could incorporate next year?

This was one of my favourite questions and our creative delegates have left lots a terrific ideas. Here are a few that I am sure we will implement next year.

Great idea Steve, and believe it or not, it was part of our plan for 2010, but it got elbowed out to make way for other sessions. Hearing the feedback from the acting session we did provide, and from others asking for more interactive and practical sessions, I am certain we will have an acting session for writers at 2011. I don’t know if it will be imrpov, but it will workshop acting for writers and entail delivering actual lines that you write.

Answer number 44. Pub film quiz – the prize being the winning table gets to pitch to some really big producer / development exec… suggested by Aideen McCarthy, Writer and also suggested by Lisa Holdsworth, Writer (and LSF speaker)

This is a GREAT idea and I am sure we will do this. It was also suggested by Lance Nielsen one of our speakers who received consistently high feedback for his practical sessions. What this really feeds into is something reflected in other areas of feedback, that not all people like networking in a bar. It’s noisy, crowded and lubricated by booze. Great if you like it that environment and terrible if you don’t. And a LOT of our delegates don’t like that environment. So maybe the Pub quiz is one fun answer, as well as more relaxed chill out and networking environments. Great suggestion. Thank you.

Answer number 36. What about a giant game of "consequences" (the game where everybody writes one line of a story based purely on being able to see the last line written)? I saw this done once and it was really funny – it was done using a roll of plain white wallpaper. You could then list the entire, probably to tally stupid, story on the website! Suggestion from Chris Marshall, Writer

Again a great idea that I am sure we will integrate.

Finally, Would you recommend the festival to another writer, director of film maker? 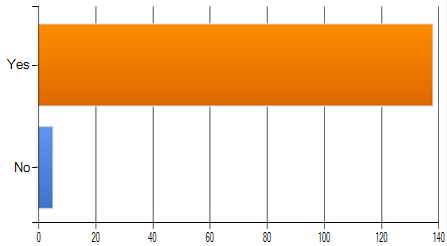 For us the most exciting statistic… with 96.5% of delegates saying that they would recomend the festival. It says it all really. Though I must admit I will need to work on the five delegates who said they would not recomend it, I am determined that next year we get to 100%!

OK so once more, a big thank you to everyone who has taken the survey. If you are a delegate and haven’t taken it yet, please do so, or drop me an email for the link (mail@livingspirit.com)

Die Hard Script to Screen with Jeb Stuart #LondonSWF
How to get the MOST from the London Screenwriters' Festival: A Delegate View
How Actors Can Radically Improve YOUR Script
Pitching at the London Screenwriters' Festival
Producers Notes: Kill Your Darlings Without Killing Your Writing! #LondonSWF
Meet Edgar Wright in this fascinating and candid one hour interview about filmmaking, writ...

And the winner is… 'A Complete History Of The Soviet Union, Arranged To The Melody Of Tetris'
Day two of the London Screenwriters’ Festival video blog