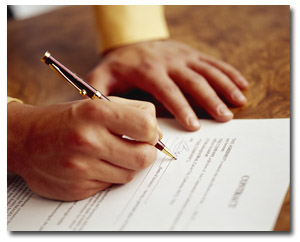 Following last weeks post where I offered blog readers the contracts you could use on your film, I thought I would add a list of tips for contracts. I called it the ‘Top Ten’, but of course, like any contract negotiation, that expanded…! So it’s a top fourteen! You can read about the free film makers contracts on the blog here.

Making a Contract
A contract is an agreement between two or more parties. It can be a verbal agreement, but a piece of paper which clarifies the terms of the contract, who will do what, when, how etc. is much better. The contract is really there so that each party knows what they have to do – it’s written there in black and white. It also protects you if things go wrong.

1. Remember, a contract is just a piece of paper and if someone is intent on doing something which breaks the contract, there is nothing you can do short of legal action (which you may not be able to afford). Some people will sign a contract and then do whatever they feel like doing, in their own interest, knowing you probably won’t do anything. No contract can protect against this.

2. If money is involved, get it up front, preferably on signing. If not all up front, as much as possible. You don’t know what might happen down the line – investors die, go bankrupt, get bored.

3. ALWAYS make a contract for everything, even when friends do work for you. If your movie is ultra successful, all those freebies and favours will cost you. At the same time, don’t get hung up on huge wordy and over the top contracts.

4. When entering a deal with a company where they will supply you with goods or a service make sure they put the quote down on paper and fax you. We had one deal fall through because the chap we struck it with had died – his predecessor wasn’t interested and we had no proof of the prior deal.

5. Follow your instincts – if something is too good to be true, it probably isn’t true.

6. Always sign a contract before any work begins (especially actors).

7. It’s obvious, but read and understand all the text of the agreement, including the infamous fine print. Never sign straight away, sleep on your decision.

8. If in doubt consult your solicitor. (in fact, consult anyway!)

9. If it comes to the choice between signing a dodgy contract and getting to make your film, OR not signing and not making your film, sign, take the money, make the movie and get ripped off. You will walk away with a very valuable experience and showreel at someone else’s expense.

10. If you are going to get a solicitor involved, make sure that you both absolutely understand how you will be charged. Some charge by the half hour, so you may get a £70 bill for ringing and asking one question. Ask if you can be charged for work on contracts only, and not for infrequent advice. Keep a close eye on costs.

11. Remember, your solicitor is an advisor. YOU make the decision and you can choose to act upon, or disregard what they say. Use your instincts.

12. If things go bad, and you get on the wrong side of someone else’s solicitor, don’t allow negotiations to go silent or stale or you may well end up in court.

13. DON’T FORGET, in all of this legal quagmire, you are here to make your film and launch your career. Resist the urge to spend time making your contract watertight and spend time developing your script!

14. Finally, even if you think you have a watertight contract, some people are just bonkers, or have limitless legal resources, so will just screw you – even if your contract protects you. It’s just a piece of paper.

And don’t forget about the American Independents Day Workshop with the amazing Ted Hope and Christine Vachon that was announced on the blog yesterday. More here.

UPDATE – Here are some more tips offered by Nigel Sizer. Thanks Nigel.

1) Ask beforehand if they specialise in media law or contract law, many don’t.

2) Apart from charging half hourly instead of by the quarter hour, some also charge ‘thinking time’ which means they will charge you for the time if your case happens to cross their mind while they are elsewhere… doing… something…

3) If you do have a major emergency, don’t be afraid to ask a major media lawyer for some time on the phone ‘pro bono’…(which is their term) for free. There are some fantastic lawyers out there who will help you out.

4) Before commissioning legal action against someone else, ask yourself one question. “How big is my war chest?”

5) If you are dealing with a small practice (i.e. one man band), ask what is the out of hours / holiday cover arrangement.

6) Don’t treat your lawyer by taking them out for a meal or drink, they’ll charge you for their time, unless you spend a lot of money with them.

Edgar Wright in conversation: One hour screenwriter and filmmaker masterclass
What’s the number one reason you won’t get hired to make THAT movie?
Chasing the dream? How to lead like a crazy person
Gone Fishing Proposal - Final Proofs Before Printing
Top 7 things I learned making my first feature 'I Am The Prize' by Oliver Purches
Final Feedback from 10 year old Guerilla Filmmaker Holly Jacobson!

They have won Oscars and Sundance, made over 100 features and REGULARLY hire first time writers and directors… YOU NEED TO MEET THEM!
What are the top five workshops at the London Comedy Writers Festival?