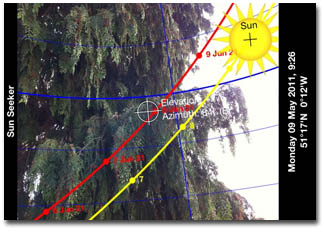 I have often said that the primary tool of any film maker is the phone. And with smartphones, that’s even more the case. I am not a fan of Apple as a company or of their computers and OS, but I do think that the iPhone is extraordinary. It really does feel like Star Trek technology.

After last weeks shoot, I have been amazed at how much I and the crew used our iPhones. While there was plenty of obvious iPhone use (costume design using it to take continuity stills of characters for instance), I also saw three apps being used that I had never seen before. I thought I should share them as powerful tools you could use too.

360 Panorama – Get 360 degree panoramic stills of locations (£1.19)
Never mind location stills, how about a 360 degree view of a locations, complete with geolocation and embedded direction data so you can see which way is north for example. This app takes a panoramic photo as you rotate on the spot, and can then upload it to the web for anyone to view. Here is a link to the farm location photo I took – http://www.360.io/PrfBHP. There are plenty of other panorama apps, but this one is quick and dirty and handles uploading very easily. Absolutely FANTASTIC for location management.

Sun Seeker – See where the sun is now, and will be later (£2.99)
This app was used regularly by our gaffer to check the location of the sun. Again, using geolocation data and the internal compass and gyroscope, Sun Seeker can offer augmented reality, overlaying the location and path of the sun over the camera view (pic). This was very useful in figuring out when the sun was going to hit window or where it would be at specific times of the day. It was the job of our camera team to check this but by the end of the shoot, I had downloaded it myself and was checking the location of the sun so I could better plan the next few shots. Very very cool.

Artemis – A directors viewfinder (£17.99)
With Artemis, using the iPhone camera, you can approximate the image you would get using whole pile of different cameras and lenses in the included database. While far from perfect, it is useful and a quick and dirty way of lining up shots and choosing your prime lenses.

Do you have any apps of your own to add? Let me know and I will keep adding to this list of film maker specific field tested and useful iPhone apps.

Watch inspirational dance film shot over two years, umpteen countries and with four genera...
Shooting my first film on an iPhone – what we Iearned
Why every film maker should have an iPhone: Part 2
Why we should all be embracing smaller film budgets and innovating

How can you go from being a struggling film maker and writer all the way to the Oscars and BAFTA's? Meet Gareth, he just did it!
Why costume, makeup and production design is so important to your film

10 Responses to Why every film maker should have an iPhone