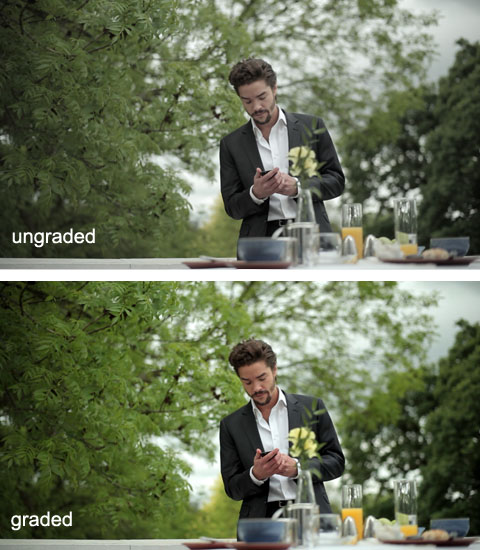 During the Guerilla Film makers masterclass, I showed a film that  I made recently for a corporate client, a drama set at a wedding. it was shot on both 5d and 7d and the cut I screened at the class was an incomplete ungraded cut.
Yesterday I spent the day in Soho with colourist Peta Ridley as she put the footage through it’s paces in order to grade a beautiful and sumptuous film from our footage. We conformed and graded in FCP and Colour (and had a lengthy chat about evil Apple who have abandoned a whole professional community who had invested time and money into both FCP and Colour).
I was quite apprehensive as I had heard stories of how 5d footage can fall apart in a grade, but I have to say, my experience was completely the opposite.
We had very few issues with crushed blacks or clipped whites, no issue with rolling shutter or unsightly noise in shadows, and only a few shots had the dreaded herringboning effect that is common with DSLR sensors (appearing on an actors suit, and there’s not much we can do about that – see right).

So, the film now looks gorgeous, with rich and deep colours, ephemeral highlights that glow and a magical look that befits a wedding day. Well done Peta. And more to the point, well done DP Mattias Nyberg whose cinematography was pretty much bang on for every shot.
It appears that the secret to grading DSLR footage is getting it right on set so there is no need to pull extra detail out of shadows or highlights in the grade. With the H.264 compression used by these cameras there just isn’t much detail available, what you see is largely what you get, so getting the exposure right is critical.
Peta showed me some shots where, if she pushed it, I could see the horrible noise and artefacts in the shadows. If you shoot DSLR and underexpose, you can be sure that you will be fighting a losing battle in the grade and your images will start to suffer.
Another consistent issue was flesh tones being a little bit orangey.  This was worse on 7d footage, but in practical terms, it was easy to correct. Apparently this is a known issue with the Canon cameras.
As well as main unit, we also had a unit in Italy shooting 7d. It’s remarkable how much difference there was between the different cameras and units, with the Italian 7d unit looking significantly poorer. I can’t be sure but I suspect they were not using great lenses – our UK unit was shooting with top end cinema primes and the difference was startling.

We also added a little light diffusion to the highlights which generally took the sharpness and digital look out of the images, creating something more filmic. We also added a subtle darkening and defocus vignette. All very pretty and appropriate.
Overall I was impressed at how good the images looked on a large HD monitor and how well they held up under grading. But I am pretty sure that if our DP Mattias hadn’t got the exposure so consistently right, we would have faced some horrendous grading problems.

Making Feature Films For No Money: How I Made My “★★★★ Intense and Tender Psychological Th...
Micro Budget Film Making Law Number 8… Get A Single Shooting Location To Fulfill Multiple ...
Creating the magic of the Nativity... on a shoestring
Why we should all be embracing smaller film budgets and innovating
Failing to plan is planning to fail... Film making success lies in pre-production
Colour Grading Your Film – Top Nineteen Tips For Working With The Professionals

Should you use a title sequence for your movie?
Annual Film Makers and Screenwriters Summer Networking BBQ – Tickets GBP £3

5 Responses to Grading 5D Footage With FCP and Colour