Writer, composer and good friend of mine, Guy Rowland, made a unique feature film a few years ago and has just released it online 100% free. The story behind the film is both extraordinary AND a stark reminder to ‘get on with it…’ I asked him to share some of his experiences. His ‘Making Of…’ is above, the complete movie at the bottom of the post. Over to Guy… 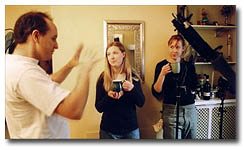 ‘In the first incarnation, there never was any idea of making a film.  It’s always been hard to describe what really happened.  It either sounds crass, unbelievable, over-hyped or just plain confusing.  My solution to that problem eventually was to explain everything in a second film which lasted longer than the original one.  But I appreciate not everyone has the time or inclination to sit through a 90 minute tale, so I thought I’d jot down a few words here, writing almost 10 years after we first met Posy Miller.

“We” are three friends. Debbie Garrett, Chris Healey and myself had known each other for years, and all fancied a go at an experimental TV project.  In 2001/2002, Reality TV was becoming ubiquitous, and I’d been struck by the BBC’s video diary series – short little programmes which were candid insights into the lives of ordinary people.  I’d begun to wonder what a fake one would be like… masquerading as reality but actually drama performed (hopefully) so well people wouldn’t realise as the person began to psychologically collapse before their eyes under the dispassionate gaze of the lens.  It was chance to explore some of the issues and morality around using people for entertainment (and the pact with the devil that people willingly subscribe to).  It would, of course, all hinge on finding an unknown actor good enough.

I’m not quite sure where we put the ad now, but Posy was one of scores who replied and her audition tape leapt out.  When we met we were all pretty seduced by her unique combination of intelligence, deep compassion, zest for life and viciously evil sense of humour, and we clicked pretty much instantly.  So we had a ridiculous amount of fun filming short little excerpts from our story and a handful of full 5 minute episodes, enough to try to sell the concept to TV folks.

Maybe this part just sounds mawkish, I dunno… I guess I’m a heart-on-my-sleeve kinda guy… but then it happened.  In the space of a week, Posy became chronicly ill, then on Christmas Eve 2002 died of what we eventually found was acute leukemia.  It was the first bereavement in my life where I’d felt it as the sledgehammer it can be, with all the disbelief, shock, blackness.  Even though I’d only known her 9 months, it felt like a lifetime’s deep friendship had gone.

I guess the three of us felt it in the same way.  We all went to the funeral at Stoke City FC’s Brittania stadium (Pose was a life-long fan).  We’d once met her boyfriend Kane, but knew nobody else.  Perhaps stranger, not only did no-one else know us either, they had no idea why we were even there… the entire project had been deliberately kept secret even from those closest to her, except Kane.  But we were immediately accepted, and I was deeply touched that Pose’s mother, Misha, spent so much time with us on that day of all days (and Kane too).  A friendship with both started that has endured, Misha and I seem to spend half our lives talking to each other today, it seems so odd that we never knew each other back then.

The realisation that we had her best work on tape, but no real form with which we could use it, began to slowly drive me mad.  Then the idea hit – use the old “found footage” conceit, with Sam now a missing person and the tapes the new film’s centerpiece.  All the characters we’d alluded to and plotted we could now feature in a faux documentary film.  It actually became a fascinating and unique writing challenge (though we were advised that we’d never make it work as “these things” never do).

We fought with each other, we agonised over the morality of it all, but every family member and friend we spoke to encouraged us on and so we eventually went ahead and did it.  We cast only people with a connection to Pose (usually old friends of hers).   We filmed on a shoestring budget but using a great lighting cameraman, Michael Sanders, who totally saved us, then edited for I-can’t-remember-how-long… endless new edits, reshoots… whatever it took to make such an intricate story click.  Somehow – we think – we got there in the end.

It got into the Raindance festival, got its British Independent Film Award nomination and a couple of reviews (both good!), and as is the way of the odd impossible-to-categorise microbudget Brit flick, promptly disappeared.  Boring music rights issues were precluding a proper release, but after a couple of years we resolved those and did a DIY job – the first “pay what you like” movie (modeled after Radiohead’s In Rainbows album). Again, a little flurry of interest and kind words, but… well, what IS it?  How would you categorise it?  I’ve always been drawn to odd little films that don’t really fit into any conventional genre, but they’re a nightmare to sell or raise publicity for – especially when they’re not in the cinema or even on DVD.  Oh, and add to that the basic promotional requirements were woefully inadequate (rookie filmmaker classic error, as independent film guru and friend Chris Jones rightly pointed out!) 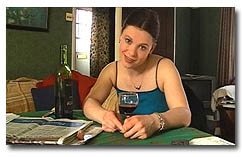 But what I soon came to realise is that it didn’t matter.  The film was shown in London’s West End in the Raindance festival, and Pose’s family were there.  The response I got from that, and the friendships that had come from the whole experience… frankly if it had won Best Picture at the Oscars and beaten Titanic at the Box Office, it genuinely wouldn’t compare.  It was made as a permanent record of what Posy could do (albeit doubtless a fraction of what she was capable), and a response to the extraordinary woman that she was.  Although it might sound like rationalisation in the face of failure, commercial success really would have missed the point.  It was a labour of love and a gift to the family.  And well…. the fact that those who did see it said they got swept up in the story, forgetting even that it was fiction… well, that’s nice too – it always did have to stand on its own two feet, and I’m proud that it does so.

So here it is (BELOW) – free hopefully forever for anyone and everyone who stumbles upon it.  If you watch it and get anything out of it at all, feel free to do any of these things – hold your loved ones a little closer, vote for it at IMDB.com, write to me at guyrowlanduk AT yahoo DOT co DOT uk to tell me what you think, donate a bit of money to Leukemia Research and / or Missing People… just do something, anyway.

I don’t think I’ll be producing any more movies (these days I’m too busy scriptwriting, composing and doing sound work)… I honestly don’t know how anything else would warrant the energy it takes to do this stuff.  But I’m so so glad we made it.  I’m so grateful to the friendships that came from it, for the sheer endeavour that it was against all the odds, and most of all that her family have it forever.  If Posy taught me one thing, it’s this – life is for living, because it really is too short.

Love to all the good people out there and sod the rest,

Remembering A Towering Creative and Passionate Filmmaking Force…
Demystifying Distribution: Real World New Distro Case Study Strategy and Tactics
Film Producers Survey by Stephen Follows in the wake of the NPA collapse
Dragons, Reapers and Guerilla Filmmaking: Turning Writer to Director With My First Short ‘...
How I Cast Brian Blessed, Joanna Lumley and Jack Davenport in my fantasy short, Guest Blog...
How one filmmaker secured a UK distribution deal for their £30k horror movie WITH advance!...

Tips For Shooting A Wedding Video On Your iPhone and Editing on iPad
How To Crowd Source Your Movie Poster Design… run a competition!