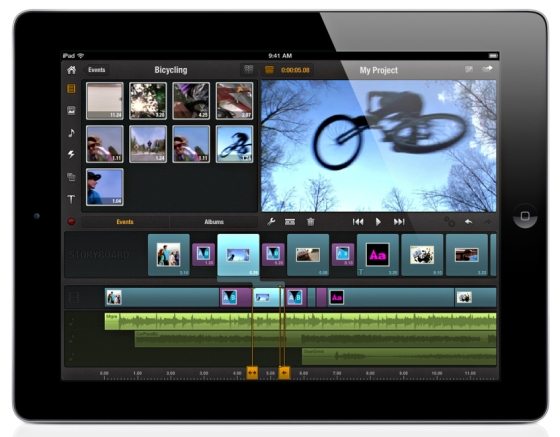 Last week, film editing heavyweight Avid released their iPad app, Avid Studio, taking on Apple’s own iMovie app head on. I used iMovie last year for a family wedding video where I shot on my iPhone, edited on iPad and premiered for the family during the wedding dinner, blog post here. It was a real hit too, as being able to present a fully edited wedding video just a couple of hours after the event was kind of like magic.

Editing with iMovie was possible (just), but in my view, absurdly limited, feeling a little bit hobbled from the get go (I am guessing by Apple developers).

In stark contrast,  within five minutes of using Avid Studio today, I was a little bit in love. In my opinion, Avid Studio wipes the floor with the woefully limited iMovie app.

Almost every single thing iMovie does, Avid studio does better. And it does loads more too.

If  you have ever edited professionally, you won’t need to read any manual as it’s so intuitive to use. The look, feel and operation owes a great deal to the Avid heritage too, though let’s be clear, this is no professional editing tool. It’s designed to be a quick and dirty tool to edit on the go.

Setting ‘in’ and ‘out’ points, dragging and dropping to the timeline and trimming are all pretty much effortless. Multiple audio tracks means you can add music, atmospheres and sound effects too. Very cool and way beyond the iMovie app.

It’s now only a matter of time before someone shoots, edits and distributes a feature film directly from their iPad.

If you own an iPad and you are a film maker, you would be insane to pass up on Avid Studio. Right now it costs about the same as a latte.

Five stars from me!

Editing masterclass with editor Eddie Hamilton on X-Men: First Class and Kick Ass
Summer Scars, DVCProHD Feature In Post...
How to recut and remix your film… a terrific example
Editors career plan at BVE 2013
Inspirational Podcast: Editing 'Mission Impossible' with Eddie Hamilton
A Career As A Film Editor: The Strategy and Tactics for Success

Should British Film Makers Capitalise on the British Brand?
CrowdFunding 101, ‘The Urn’