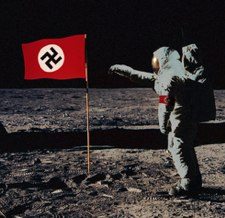 You can see the pitch meeting… ‘At the end of World War 2, Nazis left the earth and built a base on the dark side of the moon… and now they are coming back to invade…’ I suspect that most writers or film makers would have been greeted with ‘Nazis from the moon?…OK… what else have you got?’ But here we are, with Iron Sky about to hit our screens, and cor blimey guvnor, it looks kick-assingly-fantastic!

You can see from the chart how the budget breaks down (so far), with that all important first 300k euros getting the film makers just far enough down the line to prove they are not crackers. It proved that they had a great concept that audiences responded to. 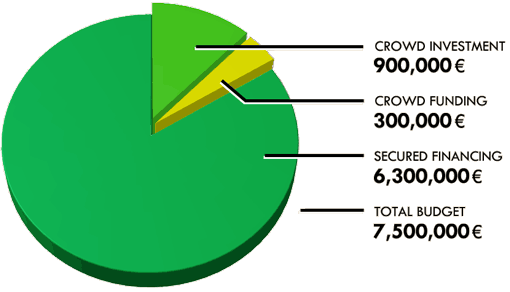 No surprise then that what followed was traditional film investment and a budget of 7.5m euros coming from sources such as the Finnish Film Foundation, Eurimages, Hessen Film Invest, Screen Queensland, pre-sales etc.

What’s fascinating here is that the crowdfunding acted as a way to build a solid foundation, to offer proof of concept.

Go on, watch it again. LOVE IT!

How and why you should consider running a LIVE event as part of your crowdfuning campaign
How To Crowd Source Your Movie Poster Design... run a competition!
Five Important Lessons that I used on my feature film 'The Journey'
5 Tips On Making Your Crowdfunding Campaign Stand Out... Guest blog by Lucy V
LSF volunteers Tila and Patrick had all their money stolen by a devious con-artist and are...
Veronica Mars on Kickstarter – is it good news for indie film makers?