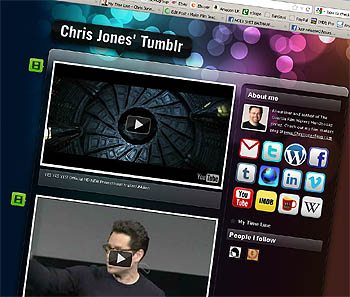 If blogging is where you share your thoughts, Facebook is where you connect with friends and Twitter is where engage in short conversation, Tumblr, is kind of like that shoebox under your bed, full of random but very cool stuff.

Tumblr is a microblog with a strong emphasis on images and video, though it can handle all manner of other cool stuff to.

If both Facebook and Twitter have that ‘here now, gone tomorrow’ kind of feel, what’s cool about Tumblr is that, like a blog, it’s a permanent archive. It’s also minimalist in feel and uber easy to update..

So why do we need ANOTHER social media tool?
Of course we don’t NEED it, that’s not the point. It’s whether you like it – and like all social media, you should really only do it if you truly enjoy it. If you don’t, your community will inevitably figure out that you’re not really engaged and they will disengage with you.

If you have never seen a Tumblr page, you can check out my Tumblr here…
http://livingspiritpix.tumblr.com/

All Tumblrs have an archive, which is very cool. You can check out mine here…
http://livingspiritpix.tumblr.com/archive

And your Tumblr is skinable too, there are tons of free themes that you can choose from, as well as more advanced paid for premium themes.

Consider your name carefully as with all your social media presences, it should be consistent. So I called mine, LivingSpiritPix inline with my Twitter handle. That’s what the URL shows – http://livingspiritpix.tumblr.com

I actually named it Chris Jones’ Tumblr on the page (and you can change this anytime you like).

Themes
Changing the look in Tumblr is done by switching your theme, and it’s really simple – click on the Preferences icon in the top right and then the big ‘Customize your blog’ button (you get access to all your other settings on this page  too).

Click on the button and you will be take to a new Customize page – it’s all pretty intuitive. If you know HTML and CSS you can also modify the code easily. I am not that brave!

One very cool thing I found is that if you add HTML code to the Description box, Tumblr will identify this as code and correctly render it on your page – that’s how I added all my social media buttons to my page. But you can add anything you like in this box.

I also added a page with my Time Line of my work using Dipity, which you can view at…
http://livingspiritpix.tumblr.com/timeline

You could add any page you like, maybe a page for each of the films you have made? I will probably get around to doing this in due course.

Pages are built on HTML content too, so you can add pretty much anything. Very cool.

I also set my Tumblr to auto Tweet when I update it.

Followers
It’s a good idea to check out what other people are doing on Tumblr, to get a feel for it, and maybe follow a few. I get an email whenever someone new follows me, and I can check out my followers by going here – http://www.tumblr.com/followers – this link will take you to your followers page when you have an account setup.

There is no doubt too, Tumblr has a much younger following in general than say Twitter, or typical readers of my blog. If I were making a teen movie, Tumblr would be my first choice for our blogging platform. Right tool for the right job.

And that’s about it? Easy and fun.

So why Tumblr?
There is no doubt that during the heat of production, shooting a pic or video and uploading to Twitter is a great strategy, but it’s just as easy to add that pix to Tumblr too, which creates a media rich and chronological archive of your content. Given that Tumblr can autoTweet, in the heat of battle on set, I will be updating Tumblr and letting it do the Tweeting of pictures for me.

Plus, most importantly, Tumblr is a whole new community of people I may not be penetrating right now.

But I will say it again, don’t feel obligated to engage with Tumblr, or any social media tool, it’s really down to if it chimes in with you. And so far, I am enjoying Tumbling.

How to Turn Your Followers into Doers... How I did it in my Fantasy Epic by Kate Madison
Are you a digital native or a digital immigrant?
Brand Engagement Like It SHOULD Be Done Today - Learning From Bodyform
Are we killing our creativity with social media?
Did you know you can manually edit your Facebook URL to be much shorter? Ideal for busines...

Film makers, want your own branded daily newspaper? Get YOUR Paper.li to promote your work or brand.
If everyone has everything, how do you compete? In praise of Actors…