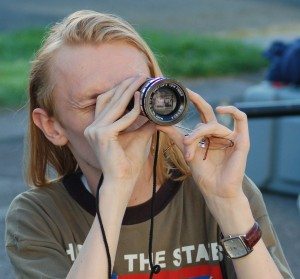 Back in 2006 I was one hell of an ambitious filmmaker with the belief, passion and ego to boot that I was destined for big things. I was in a real rush to get somewhere other than where I was, so I set out to make a film on a £30k budget (that eventually ballooned to over £60k) via credit cards and didn’t look back.

Fast forward six years to now, and I’ve just released the film via Distrify after learning a lot of lessons about myself. Looking back at the naïve (some may say delusional) 26 year old, it’s obvious that I made just about every guerrilla filmmaking mistake in the book.

I feel like what I’ve learnt and have to share with you in this blog is indie filmmaking law, but hopefully some of it will be of help:

Pre-Production
The worst thing you can do is set shooting dates in stone and hope that when those dates come along pre-production will be all done. That’s never going to be the case, and for me it meant I was running around like a blue-arsed fly right up until the day of shooting began.

If I was going to shoot another movie I would wait until every little thing was in place until declaring when we’d shoot. 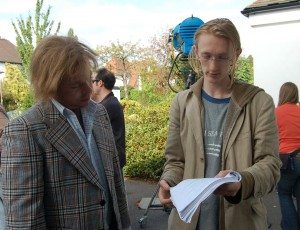 Things Will Definitely Go Wrong
It’s inevitable. You know it, I know. It’s how you respond (not react) and deal with the proverbial poo as it hits the fan. I ended off walking off set towards the end of the shoot because the pressure was just too immense for me to deal with.

Shooting a feature is an exhausting, insane marathon – you need to have an almost Buddha like mentality to life on set every single moment. A sense of humour helps as well. Be kind to people!

Don’t Self Fund Your Movie
No matter how badly you want to make your film and no matter how hard it is nowadays to find funding – PLEASE DON’T SELF FUND YOUR MOVIE!!!

12 credit cards helped fund Blaggit in 2006, and I’m still in debt now. It was a very reckless and mindless decision on my part – I really was desperate to make the movie! When you believe in something and want something bad enough then nothing in the world will stop you from getting it – but the consequences

Kevin Smith was an exception. Don’t be foolish and think your movie will be a great success within a year and you’ll pay every penny back.

Don’t do Everything Yourself
If you want to direct, just direct. If you want to produce, be a producer. NEVER direct and produce on the same project – a mega fail for me on Blaggit.

I couldn’t find a producer so decided I’d do both jobs at once. I can’t tell you how much of a mistake that was – I was constantly swapping my directing hat with my producing hat between set-ups.

I even dealt with the finances all myself as well (well, they were MY credit cards after all!!) which is absolute insanity looking back now!

I was sure I could do all the above myself as I had done it before on smaller budgets, but the pressure and workload is just far too much for one person to carry.

Keep Crew & Equipment to a Minimum
For Blaggit we had over 20 crew members, over 15 cast members and for the first week of shooting about 50 odd extras – utter lunacy I tell you!!

We also had two van’s worth of camera and lighting equipment. These days, you don’t need that amount, not with the boom of DSLR cameras over the past few years. We shot on super 16mm and the amount of film we burnt was unreal!

You don’t need the most impressive camera and you don’t need an army of people to make your film. You need a core group of people who you can trust and who believe in your vision.

The Script is King
I got to a certain draft with Blaggit and decided that was it – I’m happy with it and I’m not going to change the script any more and this is the script we’re going to shoot. Ridiculous!

Get as much feedback as you can. Put your ego to one side and really look at what people are telling you – if not then you’ll end up with a film that’s just okay instead of amazing. 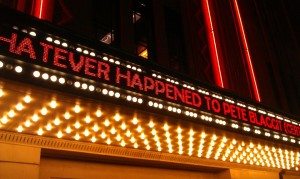 Festivals
I submitted Blaggit to over 20 festivals and we got accepted to several. Make sure to include this cost in your budget – which I didn’t! It’s very expensive and you will get turned down more times than you’ll get accepted.

Do you really need to enter into festivals though? Forget the big ones like Sundance etc – that’s just the ego dreaming the impossible again.

We won a few awards – including Best Feature at the 2011 British Independent Film Festival – which sounds great!! – but that of course is just ego stroking.

Blaggit got accepted into a few US festivals – a cool excuse to travel and see a bit of the world. I was lucky to see Blaggit screen at San Antonio and Roswell within a matter of days – when else would I ever get the chance to go visit Roswell?! 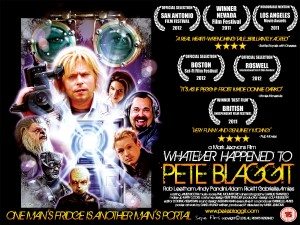 Distribution
Ah, the long road of securing distribution. If you think making a feature is the hard part, then think again!

We signed with a small DVD UK distributor who promised to get Blaggit into every supermarket chain in Britain. They delayed the release of the film for over a year, until eventually they went bust!

Do people even buy DVD’s any more? Of course the ego dreams of seeing your film on the shelf in HMV, but it’s a dying business model. With Distrify the film is easily available to people online and I will get a monthly income – with a distributor I would have been waiting months on end just for a few pennies. 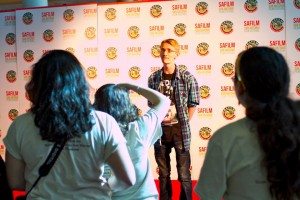 Sticking With Your Film til the Bitter End
So after all that, am I proud of Pete Blaggit? Yes and no. There are parts of the film I really like, but of course it could have been so much better.

What I am proud of is that I stuck with the film til the bitter end. That’s the real accomplishment with the film. Once the cameras stop rolling and everyone goes on to the next film job – you’re going to be left with the film until the day it’s available to buy in whatever format, and that can be a very long and lonely road to walk down.

And believe me if you have a half finished film that you’ve fallen out of love with then it’s very tempting to walk away and move on to something else. But you have to see it through to the very end.

It’s taken over six years from inception of Blaggit to get to the finishing line now and I’ve changed soooo much as a person over the film’s lifetime, so you have to believe in what you’re doing – and you have to love what you’re doing because if you don’t then you’re going to be very unhappy for a very long time.

The most important movie in my life was ALIEN... Here's my 'Prometheus' review
Where are you drawing your inspiration from?
One filmmakers journey… how we met at the Guerilla Masterclass and went on an extraordinar...
Watch a truly innovative short film that will open doors for filmmakers
Mankind Is No Island, Interview and Film
Top Ten Tips For Making A Contract, a Film Makers and Producers Guide

RED blows feature film distribution wide open
Can you write a song for the end credits of 50 Kisses?