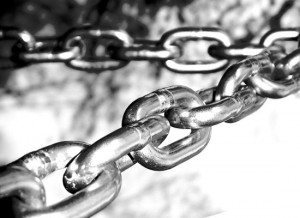 A week or two back, Filmmaker Jordan Clarke shared some of his personal nightmares on his own film regarding chain of title and how it nearly killed the production dead – you can read that post here. I asked hi to expand into a bullet list and here it is…

We all know that you can’t have your main character wearing an Adidas tracksuit.  We’ve been taught that we must secure the script, actors and music licenses before we can exhibit our film.  Unfortunately, CHAIN OF TITLE runs much deeper than that if a filmmaker ever hopes to have their film distributed or broadcast.  I’ve outlined the top 5 mistakes that I see almost every DIY filmmaker make.  To keep the list short, I will assume you are making your feature film under a limited company with production insurance  to protect yourself, the cast, the crew, equipment and footage.  You are doing that right?  Or did I just turn this ‘Top 5’ into a ‘Top 7’?

First, what is ‘CHAIN OF TITLE’ ?
As part of your deliverables to an interested distributor, broadcaster, or purchaser,  you will need to acquire Errors and Omissions Insurance.  In order to do this, you must have a clean CHAIN OF TITLE for your film.  There are hundreds of copyrights being created on a film set.  The cinematographer, actors, director, make-up, FX and wardrobe are all creating individual copyrights.  It would be a laborious process to get permission from all of them every time the film was exhibited, distributed, or sold.  This is why everyone on your film must sign an agreement that assigns the copyright to the production company.  It also requires you to secure permission to show any trademarked logos or brands.

1. LOCATION:
Congratulations, you secured the dive bar that you always knew would be perfect for your shoot.  Unfortunately, all those neon signs that make it so perfect can’t be used.  Although you secured the right to use the location, you still need to secure the rights for all the trademarked logos and brands in the background.  Why?  Because you are creating a fictional story and those brands should be given the choice as to whether they want to be a part of it or not.   Unless you have the $ to hire a lawyer, I’d recommend not treading into ‘fair use’.  You have two options: First, talk to the legal department of those companies and ask for permissions (you’d be surprised how many say yes when provided the context).  Or, create your own ‘fake’ logos and signs.

2.  CAR LOGO:
You own your car, so you should be able to use it for whatever you want right?  Wrong.  Again, you are creating a fictional story and ‘Hyundai’ should be given the choice as to whether they want to be the brand of choice for drug addled killers.  Fictional is the key part here – if you were shooting a documentary and a drug addled killer actually did drive that car, you’d have a better argument.  Again, get permission (I know filmmakers who have been given permission after providing the script).  CAR LOGO part duex:  Get permission from the legal department at the company headquarters,  not your local car lot.

3. BUSINESS NAMES:
So you are doing everything by the book – you have production insurance and you’ve negotiated a permit to shoot on a city block.  While the permit gives you the right to shoot on that block, it does not give you permission to film all the businesses that are on that block.  It is prudent to speak to the businesses first and ask them for permission to include their signs in your scene.  It  is generally not a problem when dealing with local businesses, so select a block that isn’t littered with ‘Pizza Hut’ and ‘Starbucks’.  There is a difference between  shooting without permission in middle of nowhere  and shooting on a city block in the most litigious country in the world (USA).

4.  MORAL RIGHTS:
While most contract templates found on the internet assign the copyright of any work produced to the production company, very few deal with ‘waiving’ the moral rights.  Copyright deals with the ownership of the work, while ‘moral rights’ deal with how the use affects the integrity of the artist’s work.  Why is this important?  I saw , first hand, a director (who refused to waive his moral rights in his contract) stop distribution of a 2.5 million dollar film because he felt the edit affected the integrity of his work and his reputation. There could be arguments made either way, but the issue was settled out of court and the film shelved, never to be seen.  It is important that everyone on your film waives their moral rights to enable the distributor to edit for time, modify it for exhibition on flights, or to meet censor regulations in foreign territories.

5. TITLE CLEARANCE:
You have 5000 Facebook fans, 10,000 followers on Twitter and your Tumblr posts are being re-blogged by the dozens.  You get into a film festival and a distributor is interested but requires a title clearance report  as part of the deliverables .  You are cool with that because you already searched IMDb and Google and can safely say there is no other film called “WordPress”. While this example is extreme, there are hundreds of companies who would be willing to file a law suit claiming your title could cause ‘consumer confusion’.  Again, the idea is avoidance of issues, not winning or losing. A title clearance should be performed before you go into production.

What can the Independent and DIY filmmaker do?
Educate yourself.  Why limit the possibility of your film reaching  its maximum potential audience?  I know there is a gaping hole in accessibility to easy-to-understand information about CHAIN OF TITLE. To fill this,  I plan on  launching a free filmmaking resource,  chainoftitle.ca,  which will provide the information needed to secure, assign, maintain and protect the copyrights in an independent film – whether you are the one securing or the one assigning. We will include animations with explanations by independent filmmakers and entertainment/ copyright lawyers.

The resource will launch in NOVEMBER 2013.

Great stuff Jordan, thanks for sharing.

12 Responses to How to kill your film dead Part 2: Top 5 DIY Filmmaking Mistakes You Might Be Making