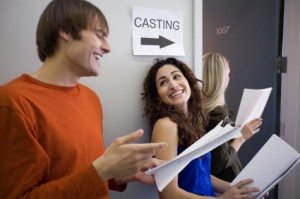 How do you go about casting your film?

The first thing to understand is that there are two very distinct and separate parts when working with actors.

The first is all business, it’s when you advertise jobs, approach agents, interview actors and invite them to be part of your film, then negotiate contracts and conditions etc.

The second part is the craft and art and involves the actor doing what they were hired to do – to bring heart, soul and a physical body to what was once merely words on a page.

When you penned your screenplay, you will undoubtedly have written without major consideration of the budget.

Upon completion of your shooting script, a draft that you will be happy to present to actors, ask yourself a simple question – ‘can I cut down the amount of characters in the film?’

You  might resist this notion, believing that all your characters are individual, unique and necessary. But because of budget and schedule restrictions, you will probably end up merging characters to reduce the number of actors needed. Leave this too late and you will do it just before the shoot, under pressure and with minimal creativity. So why not do it now when you can think clearly and are not under pressure? Do it early.

Another simple cut would be if your lead character is attacked and beaten up by four men. Ask yourself, can this be three men or even two? Budget saved!

If you are not working with a casting director, you will most likely put a call out on sites like CastingCallPro.com etc.  And you will then get inundated with responses, especially if your project looks good and pitches well.

The reality is that there are too few good jobs for actors, especially at the entry level.

Audition as many actors as you can.

Think of this as speed dating.

Think of this as finding the right relationship.

DON’T think of this as choosing the right props.

Actors are sensitive humans, and it’s their vulnerable, playful nature that makes us powerfully connect and empathise when they inhabit our characters and emote our stories with authenticity.

So create the right space for a relationship to develop that is two way. This begins with how you treat actors at the audition.

To run an audition you will need a venue – a small room will do, ideally quiet, tranquil and bright, with another room or waiting area adjacent. Draw up a list of times, starting at 9am with breaks every twenty minutes. Start filling these twenty-minute segments with actors until your day (or days) are full.

Have a pile of business cards ready and a video camera with a good mic.

Have a list of links to online CV’s so you can check people before they come in (you may also print but I would save paper / ink / toner / the planet).

At 9am your first actor should turn up. Invite them in, tell them about the film, ask them if they have any questions, then ask them to read for you. After one or two readings, you may want to film their performance. If you do, ask them to say their name, phone number, agent (if they have one) and agent’s number at the start of their taping. If you don’t, you’ll forget who they are (you will be astonished how actors rarely look like their photos) as everyone quickly merges into a sea of faces.

Don’t be afraid to direct – it’s your job!

Actors respond very positively to direction and it’s a good chance for you to practice and build that relationship.

Look for interesting actors, people who have something before they open their mouths, and avoid casting people who look similar as this can cause confusion for the viewer in the final film.

During this audition, your 9.20 interviewee may turn up. In an ideal world, you’ll have somebody outside offering tea and generally keeping people happy as it’s inevitable that you will fall behind schedule. Don’t audition too late into the evening as the process is extraordinarily draining.

After a couple of days of this you might lose your voice and certainly will have a sore throat from all the talking.

Keep the production line of your auditions rolling and avoid letting the actors interview you! You don’t have time.

Most actors just won’t be right, but a few will feel like they are ‘getting it’. If you are lucky, some will nail it. Then it’s time for a recall, and if you choose them, negotiations with either the actor (if unrepresented) or the agent.

One last thought. It’s REALLY tough being an actor. And I get why so often we don’t call to say ‘sorry, you didn’t get the part…’ (we are overwhelmed by making the film, we don’t like to close doors ‘just in case’, we don’t like to deliver bad news).

But if you can, at least compliment them and thank them for their time in their audition, that will go some way.

Acknowledging hard work, courage and creativity, no matter how good or bad, will always make them feel good, and you will feel good too.You may also make a connection with an actor that leads to another role in another film later in your career. You may also be able to suggest an actor that you didn’t cast but thought was great, to friends who are making their own film.

This may be a ‘love-in’ approach, but it’s often forgotten, we are all in the same boat and a few kind words can often pay dividends many years later.

Actors And The Script: How Actors Find Their Way To Your Work #LondonSWF
An actors guide to producing: Cast yourself in the lead role
Get Your Screenplay Performed at the Actors Table Read during The London Screenwriters’ Fe...
'Withnail and I' Script to Screen with Bruce Robinson #LondonSWF
How I Cast Brian Blessed, Joanna Lumley and Jack Davenport in my fantasy short, Guest Blog...
Why If you are an actor/actress I recommend making your own work

Making low budget drama ‘Legacy’
An actors guide to producing: Cast yourself in the lead role