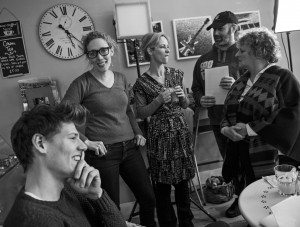 Pontius Pilate asked the epic question: “What is truth?” (somewhat churlishly, as I recall)

For those of us involved in film, writing or acting (and probably Law) it’s a good question to ask. And one that’s asked frequently.

Now, the problem with defining things like “truth” in the context of the creative arts is that it probably means slightly different things to different people. And they probably find it in different ways. Which already sounds pretentious, so I do apologise for that. Feel free to put the kettle on at this point.

My trusty 1983 edition of The Chambers 20th Century Dictionary has common denominator definitions for the words “truth” and “true”. The definitions are: “genuine”, “honest” and “faithful”. Then there’s the definition of the word “truthful” which is “telling what one believes to be true”.

I think it’s that last definition that rings the truest for me as an actor and fledgling writer/producer. Truth – and believing it fully yourself – is what makes your story “real” to your audience. If you aren’t completely convinced by what you are creating (whether it be a book, script or character on camera or stage) no one else will buy it. Not fully. Maybe a bit, for a while – just as a masterful copy of a Rembrandt might fool an expert temporarily. But in the end the fakery, the manufactured reality, the lack of authenticity will creep through.

And it will be seen for what it is – a poor attempt at the real thing.

“Acting” is a criminally misleading word, I think.

It suggests pretence. Which of course it is to a degree, we’re not actually the people we’re portraying. But we shouldn’t be simply “pretending” the people we play. We should be feeling them through and through (that’s the “truth” bit) and translating them to our audience as three-dimensional, fully-formed individuals. It’s incredibly difficult to nail, of course. I rarely manage it. I hate watching myself on screen. I can always spot the “acting” as opposed to the truth and the acting happens all too frequently. It comes from not knowing my character well enough – so I manufacture a bit of “filler acting” which does the job, but isn’t as true to them as it could be. It comes from not feeling safe with the other actor or the director, not wanting to take a risk. Or sometimes I’ve been told so specifically how to say lines, even down to the intonation of individual words, that I have nothing real to offer because I’m trying so hard to manufacture someone else’s interpretation of the character.

A great director firstly casts well. Then he trusts his actors to make intelligent and sensitive choices. He might help them find their feet, explore their character, feel comfy with each other. But he knows that the actors he’s chosen are up to the job and have talent and creativity to put into their characters and input which will bring them to life in a way that maybe the writer hadn’t seen. I had the huge privilege of working on one scene with the director Sean Durkin in the recent mini-series Southcliffe. Quiet, completely in control and self-effacing… he was amazing. I was working with three named TV actors I had watched countless times on the screen. It was my first time working with named actors. I was, to say the least, slightly nervous. We ran the scene once. He gave me one note.

I’ve nearly completed co-writing my first short film script, a story about age gap attraction, with my co-lead Richard Perryman. We shoot in October, but we’re still constantly shaving bits off and re-moulding things. In fact, we just added another character having met an actor who I felt was perfect to fill a gap in the story that didn’t ring true. Our director approached him, he said yes and now we’re writing his scenes. Perhaps a little unorthodox but it’s indie so we probably get away with it.

It’s been a very collaborative process, largely because we’re striving (though who knows if we’ll be successful) to make the process as truthful as possible. When we shot the teasers Richard and I stepped back from “ownership” of the script. The director and the other actors tweaked the script as they shot, so that it fitted their characters better. Trust is a huge part of ending up with truth.

So – how do you find truth in acting or filmmaking or writing? Well, for me – lose your ego (just do that anyway actually, egos are a pain in the ass), allow others in, take risks, write what moves you to tears, to laughter, to anger, to despair. If a page of writing or the way you are delivering your lines leaves you unmoved it’s not truthful. Find the pain, find the heart, find the real voice. It’s in there somewhere. Dig around, pull some stuff apart, stir some stuff up, bleed a little. Feel it deeply. Put yourself back together and start again. The truth is out there. And it’s ready to be told. So here’s to all of us finding our way to tell it!

Frank Spotnitz on the Writers Room Dynamics and 10 Pieces Of Supernatural Advice
'Withnail and I' Script to Screen with Bruce Robinson #LondonSWF
An actors guide to producing: Cast yourself in the lead role
How Actors Can Radically Improve YOUR Script
Get Your Screenplay Performed at the Actors Table Read during The London Screenwriters’ Fe...
Actors And The Script: How Actors Find Their Way To Your Work #LondonSWF