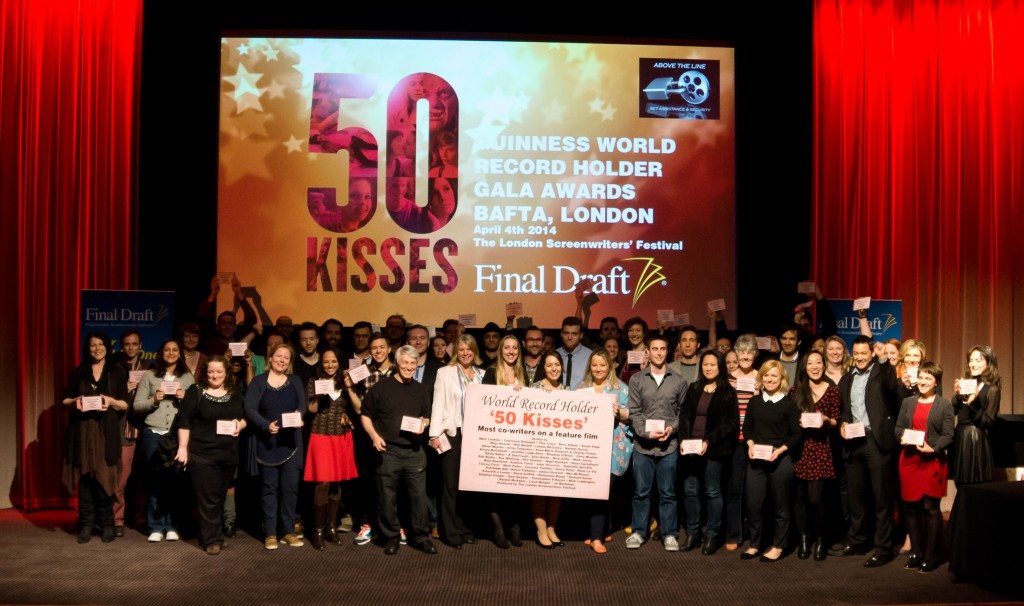 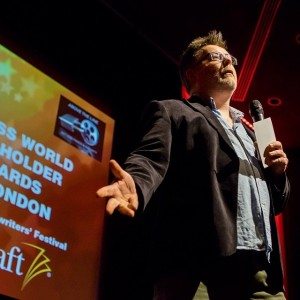 Today I joined a room full of ‘Officially Amazing’ people (there were snazzy hats to prove it!) who began a screenwriting project that became a feature film reality and has now become an official Guinness World Record for the most co-writers. And that in itself is pretty incredible before one even views the film and sees how fifty-one independent writers have managed to create projects that not only could stand on their own as shorts with an individual voice, but could also blend seamlessly together next to other strong voices to form a whole feature that just works, is not boring or repetitive, has something to offer everyone and genuinely moved the audience on more than one occasion.

Compilation films, I believe, are a special sort of art form, that explore an idea or concept from multiple points of view, offering an overall deeper understanding to the viewer of a subject matter than a single story can tell. Many of the world’s great writers, directors and actors have partaken in compilation films for this reason, and the finished piece of work that is 50 Kisses, rightly deserves to stand beside those films and hey, even surpass them in this particular epic record. Everyone involved should be really proud. The publicity alone that this World Record brings should gather attention to the film which truly deserves to be seen and enjoyed by the masses.

We gathered at BAFTA for first, a screening of the film and then a presentation of the certificates for those writers who’s record this work has achieved. Watching the film first made those of us who hadn’t yet seen it (like me and some distributors and industry folks) appreciate the level of project that has been created.

And then the fun with the presentation of certificates allowed us to show appreciation and as I was privileged to stand in for one of the writers who couldn’t be there in person, I can tell you that I felt proud on her behalf to be up on that BAFTA podium and see her work acknowledged alongside her fellows. Individually they all wrote interesting little films, together their work complied a bigger, stronger film that more fully explored a subject matter so simple, yet so complex as a kiss. It was quite a feeling to stand there as a representative among them and make sure no writer’s work got left out of the well earned huzzah.

And then we went to share drinks and talk to friends and strangers and unlike many screenings I’ve seen at BAFTA, the conversations afterwards didn’t seem to veer far from the 50 Kisses film. I found it very cool to discover that some of the project pieces I hadn’t much cared for had been other people’s favourites and vice versa and that told me that there’s not only a wide audience for this project, but that it’s likely nobody will come away without enjoying a good majority sized portion of the entire film. 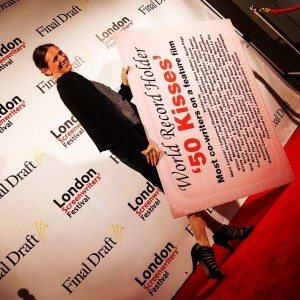 Not all of it was everyone’s preferred cup of tea, granted, but the amount of writers meant that the stories were short and focused enough to make their case and meld gracefully into the next vignette, leaving mostly positive impressions in their wake. Teamwork, a little bit of everyone, a little taste of everything. A delightful film buffet that seems to have left everyone feeling satisfied. And what satiated me more, was speaking to people and hearing what they’d moved on to since this project began two years ago.

A lot is being achieved and planned by these writers and the actors and crews who got behind their work, and my hope for them is that this project and whatever attention it garners will bring to fruition to more films that I will enjoy. At the end of the day breaking records is one thing, and not to be sniffed at, but breaking through the imagined glass ceiling that we impose on independent film and seeing that you can achieve world recognition for more than just numbers but for a collaboration of numbers is something else entirely, and well done to those people who have continuously believed and worked for just that. May your numbers multiply, you are just what the independent film world needs!

How to recut and remix your film… a terrific example
50 Kisses gets a 15 cert and the release master plan comes together!
50 Kisses on BBC Midlands Tonight
50 Kisses Films Now Being Uploaded... can you offer advice?
50 Kisses Competition Heats Up - can you design a movie poster?
Create 50… Which idea do you think we should do?