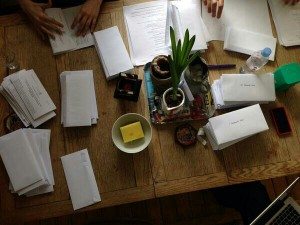 Has it ever occurred to you that there are millions of people who do not want to use the internet, don’t use Twitter or Facebook, have never heard of Kickstarter… but who want to help? Meet Emma Yap who has just raised £thousands by writing letters and not emails! Over to Emma…

When most film makers think of raising money for a film, they usually think of Kickstarter or indiegogo. While there are lots of crowd funding success stories, it’s important not to think of this as the only way to raise money. For one thing, crowd funding is only likely to appeal to younger, internet savvy people – it’s of little use for older individuals who may want to give money but may not be familiar with using the Internet. Relying on internet crowd funding can also prevent you from thinking actively about who your target market is and the different channels that you could use to approach them.

With the feature film that I am producing, ‘Making It’ (www.makingitproductions.com), we decided to adopt a number of  approaches to raising money for our film. While we do have a Kickstarter campaign running (https://www.kickstarter.com/projects/1785272120/making-it-a-british-feature-film?ref=email), we decided to use this money exclusively for post production. For our shoot, we used a different tactic – we posted letters through the doors of 500 houses in South London. As a result, we managed to more than double our budget! Here’s how we did it:

Step 1: Ask yourself who is the target market for your film?
Think not only of who would watch your film, but also of who it might appeal to. For example, while we felt that ‘Making It’ was most likely to appeal to people in their 20s and 30s, we also felt that it might appeal to older local residents attracted to the fact that the film is being shot almost exclusively in South London.

Step 2: Is there a geographical area where your target market are likely to live?
You need to boost your chances of success by targeting the right area. Bluntly speaking, people living in affluent areas are more likely to support you. We identified a couple of streets in the local area and focused our efforts there. 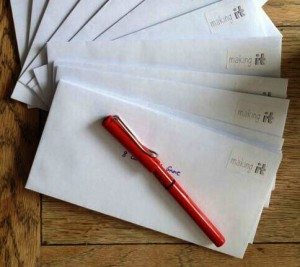 Be honest about who you are and the film that you are making, and describe it in a way that appeals to the reader on an emotional level.  We wanted our letter to reflect who we are as film makers – a group of people who want to maximise low budget film making technologies to make a ‘life affirming, uplifting comic drama’.  We acknowledged that the film was an ‘ambitious project with a tiny budget’, and began the letter with a quote from Martin Scorsese about the possibilities of low budget film making.

People are likely to be more willing to donate if they really believe in what you are doing, and if they are emotionally invested in your film. It’s important to make sure that you don’t write the letter like an investment package.

This will give readers an idea of the scale of your film and whether you, as film makers, have a clear idea of what your budget is.

Be imaginative! These can include things like receiving a signed film poster, being an extra on set, or being credited as an Executive Producer.

The chances are people are going to have some questions to ask you before they decide whether to invest in your film, so make sure you include a phone number and an email address that they can contact.

Make it easy for people to donate if they want to – we set up a Paypal page on our website which people could visit. 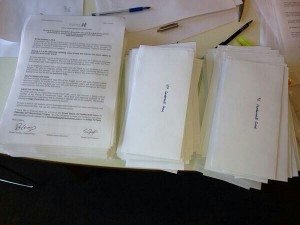 Step 4: Personalise your letters and envelope
The first and most important thing is to make sure that the person receiving your letter doesn’t just dismiss it as junk mail. We spent a whole day personally signing each of our letters, and hand writing all of the addresses with a fountain pen.

Step 5: Hold an event where you can meet contributors
Most people will want to meet you face to face before making a contribution. In our fund raising package, we stated that we would be at the local pub from a certain time on a certain date. At the pub, we made sure that we were easy to approach and had lots of materials available about the film on the day, including clearly labelled signs which we placed on our table, a copy of our budget, copies of our screenplay and copies of our mood board.  Be relaxed and be prepared to be passionate about the project.

Step 6: Follow up
Most of the people who attend your fund raising event will probably not write you out a cheque there and then, so it is important to follow up with the people who expressed interest.   We invested the time to build relationships with potential donators and it paid off!

I hope this shows that it is possible to raise money by means other than internet crowd funding.  Depending on who your target market is, the simplest methods can be the most effective. If you’ve found this advice useful, we would be very grateful if you could support our film on Kickstarter (https://www.kickstarter.com/projects/1785272120/making-it-a-british-feature-film?ref=email).

Crowd Funding Masterclass: Get Your Film Produced
How and why you should consider running a LIVE event as part of your crowdfuning campaign
Five Important Lessons that I used on my feature film 'The Journey'
How to kill your film dead: Terrifying case study and free resource
We did it! Funded AND Stretch Funded in under 24 hours!
A great example of a Crowd Funding campaign email…

50 Kisses at BAFTA for the Guinness World Records, the video
Something For The Weekend? Making The Passion Of The Christ