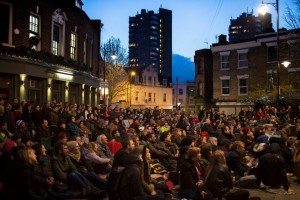 Last year I got involved with putting on the first ever Herne Hill Free Film Festival. It’s a local volunteer-run festival putting on free screenings in community venues including 4 big outdoor events. It’s part of a wider movement of free film festivals spreading across South East London which started in 2010 with the Peckham and Nunhead Festival and now has four distinct festivals throughout the year (Camberwell, Peckham & Nunhead, Deptford & New Cross, Herne Hill).

One of the joys of putting on a free film festival is that people will come along because it’s local and because it’s free and not necessarily because of the choice of film. We opened last year with a couple of silent films with live piano accompaniment from the wonderful Neil Brand. Over 500 people turned up, including many children and everyone seemed to have a brilliant time. If those films had been put on at a local cinema or were on TV I bet hardly anyone would have seen them. Making watching a film an event is a great way to get less well-known films seen by wider audiences. This year, for example, we’re showing the Saudi Arabian film Wadja at the Herne Hill Velodrome. We’re hoping because it’s an event we’re putting on that a large number of people will come see it who would otherwise have never seen the film. It’s a technique Secret Cinema have been successfully using for years. 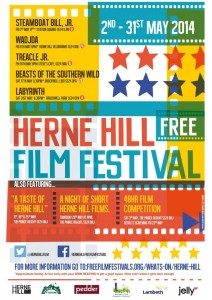 As part of last year’s festival we also put on a 48 hour film challenge. I’m a big fan of these competitions myself having just completed my 5th! I wrote about my experiences a while ago for this very blog.  This time though I was on the side of the organisers and I found it truly inspirational. We had about 20 teams enter and nearly half were under 18 teams. For nearly all the entries it was the first film they’d ever made. It was great fun to follow everyone’s experiences and joy at completing their first film. I remember at the start being asked if we had an over 65s category as one entrant was making his first film as a pensioner! In the end the winning film was directed by an experienced commercials producer; he and his wife were sat in the pub one night and spotted a poster for the competition and his wife said, “You’ve been saying for years you want to make your own film, you’re doing this competition!” So he roped in his wife and son and made a charming little film that won the judges hearts.

One of the requirements that people pull out of a hat is a Herne Hill location. This needs to feature at some point in their film however briefly. Part of the idea was to try to keep the competition local but also to be a way of documenting Herne Hill. We now have 20 films featuring shots of the area, which are a permanent record for years to come.

We’re running the festival again this year and it’s going to be bigger and better. We’re also doing another 48 hour film challenge. This time we thought we’d offer some help so Stephen Follows and myself ran a workshop last Monday for potential teams to offer some pointers on short film making and 48 hour filmmaking in particular. It was a really fun night and I can’t wait to see what people come up with this year. I hope our talk was useful.

I’m also running a local short film night to show films shot in and around Herne Hill or made by people living in Herne Hill. Obviously this is partly an excuse to show some of my own films but it’s also been a chance to discover some other great local filmmaking talent to showcase. We’ve got a cracking line-up of films to screen and hopefully they’ll all have a Q&A attached. So not only should it be a good night for film watching but also a good night for filmmakers to network and connect to other local talent.

Showing films in non-traditional venues opens up a world of possibilities too. Jamie Thraves’ film Treacle Jr has a scene that was shot in Steve’s Café in Herne Hill. So this year we’re doing a screening of the film in the café. Should be a really fun event and hopefully Jamie is going to be around to introduce it and do a Q&A. 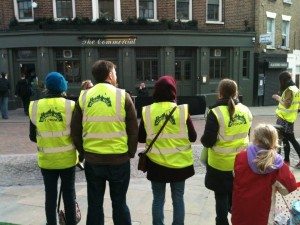 As a filmmaker myself getting involved with an event like this reconnects you to why we all want to make films in the first place. The joy of watching movies. I thoroughly recommend others get involved in similar projects. If you want to set up your own Free Film Festival then there is plenty of help and advice from the teams already doing it to start you off. You’d be surprised how much you can do with a bunch of keen volunteers and small amount of money. Getting to know people who live near you is sadly a rare thing in London. The festival has made me feel much more a part of the community I live in and hopefully has done that for many others too.

The Herne Hill Free Film Festival runs from 2nd – 31st May
All screenings are free so come along and join the fun.
http://www.freefilmfestivals.org/whats-on/herne-hill.html

FREE online seminar, 'Making Web Based Comedy and Films' with the Misery Bear Team
Nine personal and shocking experiences that reflect the terrible underbelly of SOME film f...
The 2 second film festival poll with live results... are they worth it?
Short Films on the film festival circuit, a view from one film maker... Chasing Cotards
50 Kisses selected for the Rhode Island International Film Festival 2014
The number ONE reason I encourage filmmakers to go to film festivals

Something For The Weekend? The Complete Webisodes for the making of ‘The Hobbit: An Unexpected Journey
Morpheus… ‘Do you think it’s air you breathing now?’ Choose your reality with open eyes and wisdom