So officially, I am VERY excited to announce that Oscar winning screenwriter of ‘Silence Of The Lambs’, Ted Tally, will be at the London Screenwriters’ Festival this year.

And among other sessions, we will be running a Script To Screen LIVE with Ted. First we send his Oscar winning script to the delegates, who print it out, then we watch the film while referring to the script as Ted gives us a running commentary about the script development, shooting and editing. 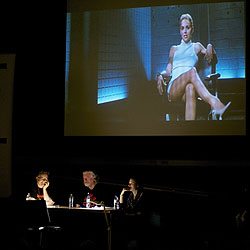 We did this last year with Joe Eszterhas and ‘Basic Instinct’ and it was a huge success – yes that’s me, Joe and Lucy V on stage beneath Sharon in ‘that moment’.

Seriously, how awesome is that?

And Ted is just the latest in a fabulous line-up. And we have even more news on the way too.

You can see all the current speakers here…
http://www.londonscreenwritersfestival.com/speakers

And all the current sessions here…
http://www.londonscreenwritersfestival.com/whats-on/sessions/

More are being added daily.

Three hours ago we were at 91% sold out. As I write this it’s at 92%. Get your pass here…
http://www.londonscreenwritersfestival.com/tickets/

And If you want to read feedback from past delegates, you can do that here…
http://www.londonscreenwritersfestival.com/feedback-2013-2/

John Cleese Podcast Lecture on Creativity and Originality: The 5 factors that you can arrange to make your lives more creative
How to get the MOST from the London Screenwriters’ Festival: A Delegate View