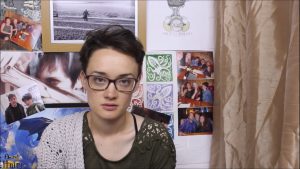 In 2014 I became slightly obsessed with YouTube, specifically vloggers on YouTube.  By this point I’d made three incredibly ambitious short films, two of which had each taken over a year to finish.  Despite my best efforts and the time that had gone into making the films I was really struggling to find an audience for them.  Meanwhile, vloggers on YouTube were making videos about anything from their favourite films to tours of their bedrooms and raking in hundreds of thousands of views.  I appreciate now how much work vloggers put into reaching that level of engagement on YouTube but at the time, on the surface, it seemed incomprehensible.  Why were audiences more interested in engaging with the day-to-day activities of a YouTube than in engaging with a story?  Then something clicked – they were engaging with a story; they were engaging with the story of that person.  Yes the individual vlog may be about something innocuous like unboxing the new iPhone, but collectively those videos told a story and when you add the videos to the vlogger’s presence on other social media sites like Twitter and Facebook suddenly the story becomes bigger.  That’s when I had the idea. 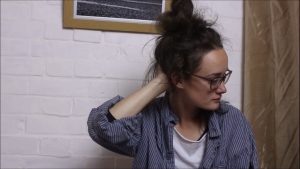 Paz is a twenty-something vlogger from Brighton, home of her superstar vlogging heroes PewDiePie and Zoella.  She has a blog where she reviews horror films but her real passion is YouTube.  Unfortunately Paz’s desperate quest for fame brings her to the attention of a particularly nasty troll.  As the trolling escalates into cyberstalking and eventually real life stalking Paz’s fans urge her to report the problem to the authorities but Paz refuses.  She knows something about her troll no one else does and it’s a secret that she can’t possibly reveal to anyone else.  She has no choice but to face her antagonist alone.Paz’s story has been told in real time via YouTube videos, blogs and Twitter over the last two years.  I set a number of rules for the
project to ensure it was ethically sound.  Firstly Paz would never earn any money.  Secondly she would always have a positive attitude, both in her interactions with others and when talking about other works.  Finally, I would vlog about the entire process on my channel as I worked on it, the idea being that if anyone was curious about Paz a quick google search would bring up my name and the truth would become clear.  This way I hoped that when the truth was revealed no one could be all that upset about it.  That was the plan anyway. 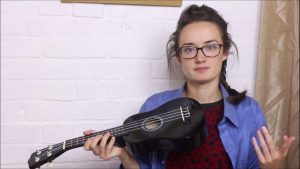 Initially the idea that an audience may be more willing to engage with an individual rather than a piece of fiction seemed to work and the YouTube videos quickly gathered many more views than my short films ever had.  As the project developed, however, it became more and more difficult to know how to transition from a vlog into a web series.  From an artistic standpoint I occasionally found myself becoming more interested in presenting Paz as real than in telling a story.  I felt there were some serious issues worth exploring around online identity and our perceptions of reality when it comes to online interactions.  With Paz I had a unique opportunity to make something about those issues and it was a fascinating process.

At the same time there was a story to be told and Paz is about to come to the end of that story.  At the end of the most recent episode Paz decided to confront her troll/stalker outside her Brighton but this did not work out well for her.  She has since indicated on Twitter that she has formulated a plan to put things right, but the audience won’t learn the details of this plan until she puts it into action on Monday evening. 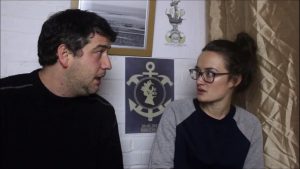 Here’s where I need help.  The final episode of Paz vs. Stuff will be uploaded at 7pm on Monday the 13th of March.  Having spent nearly three years developing, writing, producing and directing this project I’d really like to have as many people see the final episode as possible.  To this end I’ve set up a Thunderclap for the final episode.  If you have a minute please consider signing up and help me finish this unique project with as big an impact as possible.