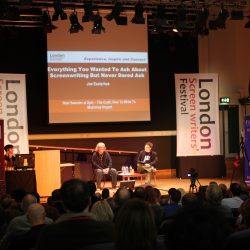 By Chris Jones on October 29, 2013 in Screenwriters Festival 0

Joe Eszterhas is a veteran screenwriter and Hollywood legend, who’s work has grossed over a billion dollars in film revenues. Considering he was an immigrant to America, writing in his second language, that’s proof of his talent and heart as a writer. He came along to speak candidly about working as a screenwriter, dealing with […]