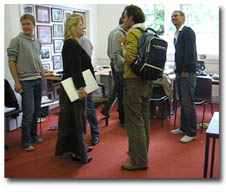 Yesterday we did an actors read-through for Rocketboy – organised by my good friend, casting director Cathy Arton, it was a long but revealing and emotionally overwhelming day. At Ealing studios, around 15 actors of all ages, sat in a large circle and performed the script. One actor read the ‘narration’ (descriptions and slug lines) while others read their characters.

So what was learned about the script?

1. It is still too long. Hearing it performed in one hit made the slower bits drag. Much like the experience in the cutting room in post production, so I need to get to work on reduction or the screenplay.

2. One or two characters where much better than expected, and as such, I think they will end up with a few more lines. This mainly relates to Doris and Glenda, a kind of Laurel and Hardy double act in the story.

3. Grandad, the main driving force behind the rockets, felt a little thin – mainly as he does not resonate off the page. This I already knew and have begun fixing in the next draft.

4. Numerous lines of dialogue became redundant the moment an actor breathed human life into the words. This will lead to a script reduction of around 3 pages – that’s three pages that won’t get to set to be cut out in the edit! All more money up there on the screen.

5. Perhaps most importantly, EVERYONE loved the script, the characters and the pace. This wasn’t just people getting all ‘group huggy’, I could sense that Rocketboy had touched and moved people. I am more convinced of it’s excellence than I have ever been! So I got a terrific shot in the arm there.

6. I had planed to record the performance on audio, but it soon became apparent that this would not work unless the whole script was reworked in places, into what would be effectively a radio play. It would also have needed more rehearsal and lot’s of microphones. I decided to get a few actors back in the future and work on a key scenes and do those properly.

On a separate note, some of the actors present told me that they had done this kind of read-through before and that usually, the scripts were very poor with thin characterisation and dialogue.

Overall, this was a very worthwhile exercise that I suspect would be even more use earlier in development. You really should think about it if you are working on a feature screenplay or project.

Production Manager Gets Onboard
First script notes truly worth their weight in gold!
‘Inception’, a screenwriters masterclass
The mountain lies ahead and my feet feel heavy...
More Cash and Crewing!