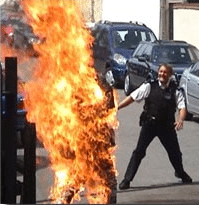 As many of you may know, stunt co-ordinator Terry Forrestal was a key element to us getting started here at Living Sprit. In the very early days of The Runner, he was an industry professional who was instrumental in giving us credibility. He also added huge production value by doing amazing stunts and bringing in crew who of effects wizards. His help continued though Urban Ghost Story before sadly, he lost his life in a base jumping accident. This was a terrible tragedy and we all felt his loss terribly.

What a welcome delight then to find that among many of the other industry professionals he mentored and helped, was stunt co-ordinator Pete Pedrero. I met Pete a few months back and we chatted about Terry and the films we were making. Today, Pete got onboard Gone Fishing and has offered to Stunt Co-ordinate it. His energy and enthusiasm is uniquely stunt crew orientated, or perhaps it’s the legacy of Terry, who shared that drive and sense of fun. So what was going to be a big problem for us, is now being handles by one of the top guys in the country.

When I chatted to Pete on the phone, I asked what he was up to. I expected him to tell me about various projects he is currently involved in. ‘I am just about to be set on fire mate, so let’s keep it quick!’ Blimey. I love the stunt crews energy!

I must admit, I do have a sense that if Terry is up there looking down, he somehow sent us quite simply the best guy for the job. So thanks Terry, even now you are helping us along on our career.

I think the pic here is of Pete, on fire, and Terry! I recognise the Forrestal grin.

Production Manager Gets Onboard
Who is in your crew? A guide to low budget film crews
Gone Fishing Update
Rocketboy rewrite begins
Gone Fishing - the budget starts to flow in