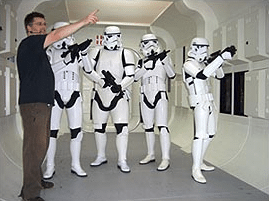 This weekend I had a great directing job – STAR WARS! Yes, I know! Actually it was at the Star Wars show, but we got to shoot little movies with people in costume and on set, who on minutes earlier, were in the crowd of onlookers. It was more theatre than movie, for sure, but a huge amount of fun. There was a huge section of set that was custom built and when filmed, boy did it look like it was just ripped out of the movie. I was struck by how, even now, the Star Wars design and costumes still hold up and feel utterly authentic to their own universe. As directing jobs go, they don’t get much better than this!

Forgive the cheesy director shot, but it had to be done!

Production Manager Gets Onboard
Watch the Behind The Scenes From The President Speaks Shoot in the Oval Office
DVD Cover printing - How to do it
Auditioning Kids All Day
More Cash and Crewing!