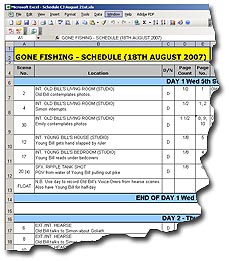 I spent most of yesterday and last night updating the schedule, which has gone through several major revisions already. The first one was done by Producer, Ivan Clemments, who then had to leave for two weeks, and it was subsequently revised by Sabina Sattar, who stepped into his shoes as acting producer. The schedule then came back to me for my final (hopefully) revisions.

I chose to actually type the schedule out manually*, copying the work that was already done, rather than use any scheduling software, as I really needed to fully get to grips with it in detail. Doing this confirmed everything I already knew about scheduling. On a cash strapped production, the director MUST be directly involved in the process, if not do it themselves. What Ivan and Sabina did was a big step in the right direction, but they did not have the advantage of knowing the shots as I did, in my head. And that’s where I was able to look at the schedule and jiggle it so that we could really maximise our shooting days. Doing the schedule is not a job for the director to delegate, more a blueprint to draw up themselves, so they know and are responsible for the resources allocated to each and ever shot and scene. Doing the schedule will make any director more responsible and less overly creative (given the restrictions).

I was also aware of subtle flexibilities that Ivan and Sabine were not aware of – where one shot could be filmed in a new location for instance, and serve the same dramatic purpose. Also visual effects, background plates, photo prop shoots etc. It’s all in there now.

Also, this is a movie with kids, lakes, animals, digital effects, practical effects, a 2.35:1 aspect ratio etc., all of which makes it more complex, minute by minute on screen, than perhaps a low budget feature (certainly the ones I have done at any rate).

Those who are interested, we compiled the final schedule in Excel.

*In the good old days in Hollywood, writers didn't have word processors and a rewrite meant pyscially retyping the whole script. That process refined the script, getting to know it better and dropping stuff that was just not needed. That's why sometimes it's a good idea to revert to the old ways.