By Chris Jones on August 4, 2007 in Art and Stroryboards 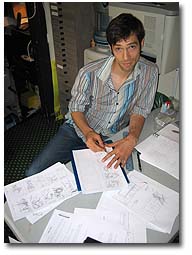 The last couple of days has been spent storyboarding with one of the most talented guys I have ever worked with, Swiss storyboard artist Gabriel Schucan. He is a very fast sketcher, and it’s wonderful to see the story come to life visually.

The process itself has precipitated a script re-write as little problems are nipped in the bud, before we get to set, with just a few words changed here and there in the script narrative. It’s like making the film before you even get to set. All too often simple problems that become nightmares on set, can be completely figured out and visualised before the shoot begins. I know this sounds obvious, but the whole process always throws up stuff. Therse is stuff we know that we know, there is stuff we know that we don't know, and there is stuff we don't know that we don't know. Storyboarding helps get to grip with the later.

It is also great as I am able to really entertain some bold subconscious directorial ideas I have, mainly to do with movement through frame – either left to right or right to left. The idea being that we in the west read and think left to right, and so movement from right to left is counter to the natural flow of things. We will see if this concept makes it to set and how it plays in the final movie.

More Cash and Crewing!
The phone rang, and from that moment, everything changed... PART 2
Rocketboy Concept Art Gets Investors Excited
A picture speaks a thousand words… use artwork to help deliver a killer pitch
Storyboarding, from idea, to script, to thumbnail, to board...
Contriubuting Composer Writes a Cue For Gone Fishing
Organising My Shot List and Boards with SpringBoard