By Chris Jones on September 6, 2007 in Film Production 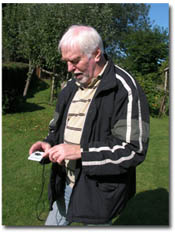 Today has been a heady mix of AMAZING and AWFUL! It started out extremely well with a Tech reccie with DP Vernon Layton and First AD Jonathan Andrew. I have never done this kind of really in depth reccie before hand and I found it very useful. It gave Vernon and I an opportunity to work through every shot, figuring out problems, set dressing, light direction etc. Vernon was a revelation for me – he even used some gadget to figure out were the sun would be at various points of the schedule so that we could plan to do shots to take advantage of the best and most appropriate light.

We also tackled lots of logistical problems – like where we will be parking generators. This is without doubt the biggest film I have ever made, among other stuff, we even have a staggering 1 TON, yes you read it right, 1 TON of cables!

Vernon and I agreed that for the look of the film, we were going to abandon lighting continuity and focus on making ever shot simply gorgeous. I have no doubt that this little movie will look a million dollars.

He is going to use a Dior stocking on the back of the lens – and not just any Dior stocking, but a line that was discontinued a decade ago. Vernon told me he bought a stock pile before they all sold out, but also, he is slowly running out of them. This will give the film an ethereal feel, softening, images, lifting blacks, glowing out whites… I can’t wait to get on set… only one day to go. 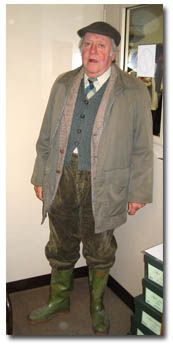 On another note, Linda Haysman has been continuing costume fittings – pictured here is Richard Symm as Old George. Doesn’t he look great!

The bad part of the day has been the ups and downs of actors being approached for Old Bill (as each says maybe then declines), following our big name actor pulling out three days before we shoot.

I can’t really believe it, but we are 1 day from shooting and I have been left without my lead actor. It’s simply astounding.

Now… In my experience, this is when magic happens. I really need the universe to deliver me a break, and I believe it will… Let’s see. So guys, read this, and let’s all imagine that tomorrow we will cast a really GREAT actor who will deliver the performance of his life… starting in 24 hours time!

Blimey. Nothing worth doing is ever easy.

How I Cast Brian Blessed, Joanna Lumley and Jack Davenport in my fantasy short, Guest Blog...
The mountain lies ahead and my feet feel heavy...
The phone rang, and from that moment, everything changed... PART 1
Reflecting On The Year… And why need to celebrate more
Top 7 things I learned making my first feature 'I Am The Prize' by Oliver Purches
Top Ten Kick Ass Tips For Shooting Action Horror From 'Zomblies' Director Dave Reynolds
We got worms!
One day to go…