By Chris Jones on September 3, 2007 in Actors, Production, Production Design 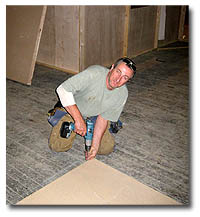 Today was the first day that I really had that feeling of 100% immersion in the film making process. Where nothing else matters.

It began at 8am, stage 3 at Ealing Studios, a huge sound stage that we managed to get for the sets for Gone Fishing. Set construction began with Mark Sutherland at the helm, and I immediately felt at home. Mark built sets for both ‘White Angel’ and ‘Urban Ghost Story’, two of my past feature films.

Production Designer Emily Johnson oversaw the construction of her designs, and after a little false start, Mark began to ‘Whack it up!’ Then to my surprise, production designer Simon Pickup turned up to lend a hand. I was delighted to see him as I hadn’t worked with him since ‘Urban Ghost Story’. Amazing!

My office for the day was the rear part of Stage 3. How cool was that!

Every few moments I was either on the phone or being asked questions. This thing is, as the director, you end up being a kind of walking encyclopaedia on your own movie, and end up being in contact demand to consult. 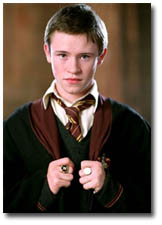 Then came the really great news. I dashed over to ComicCon at Earls Court where I met up with Devon Murray, the young actor who plays Seamus Finnigan in the Harry Potter series and who also starred in ‘Angel’s Ashes’. I had popped over to see him yesterday, and he read the script last night, loved it and now got onboard. This is TERRIFIC news as I was very concerned that the part of Young Bill would have to played by a boy with little experience and charisma. The part requires a young actor who can say huge amounts in a short space of time, showing a real character arc and growth, and also handling the physically arduous task of capturing the man eating Pike in the story. Devon will be a real asset to the movie. FANTASTIC!

Hopefully we will get news on the actors playing Old Bill and Emily tomorrow.

As the set continued to be built, I then got bad news. Production Designer Emily Johnson is now leaving for a paid job (though there is still an outside job she can stay by managing both for a few days). This has been a recurring blight for ‘Gone Fishing’. I really do understand that on a freebie job, if a paying job comes along, you need to take it. It’s just never happened that much to me, and even though I understand, it does leave us with big problems.

This has happened several times now on this shoot and I think I can attribute some reasons.

1. Film making is much more common than it used to be, so people are less committed in general. And there is more to choose from too.

2. This is a short film and not a feature (I thought that getting people on a short film for a few days would be easier. Clearly I was wrong).

3. Production Design team members are the crew members who work the longest (aside from production) so need to sustain longer on no money.

4. The biggest reason by far is that London is a very expensive city to live in and few people can afford to work for free for any length of time.

Emily assures me she will have a replacment on board ASAP and I am sure she wont let us down.

Trust is the only currency in an untrustworthy business... stunning presentation from Prod...
Who is in your crew? A guide to low budget film crews
Tactics To Get Produced: Podcast With Prolific Brit Producer Paul Webster
What’s the one thing missing from your financing arsenal?
Why If you are an actor/actress I recommend making your own work
The Three Pillars Of Successful Low Budget Horror Film Production
New Technology Communications
Watch our set go up!