By Chris Jones on September 24, 2007 in Crew, Professionalism, Shooting 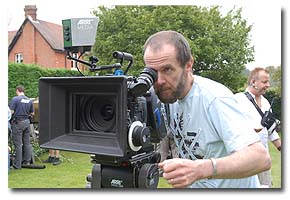 A few years back, Robert Goodwin came on my two day film making seminar,  When I asked for help on Gone Fishing, he was one of the people who answered, and in fact, kept answering and giving me reasons why he should be involved. I managed to get the photographer to shoot some pics with him next to the camera which I hope will help him on his career. I also asked if he could write a few words about his experience on the film. Here is what he said…

There’s no way I could cover everything that happened from my POV it would take too long. Not that I wouldn’t want to do it because I had a brilliant time and felt as though I’d made some really good friends in the process. I was on the film shoot as a runner so I thought if I’m a runner I should, er, run! So I kept it up most of the time.. nearly.. a bit.

So what should I include and what should I miss out? I think I should miss out the mundane things like… taking the exposed film to the labs in Slough on my way back to my brother’s, and carrying incredibly heavy cables on my shoulders, and also holding a parasol for the actors on a blistering hot day. Mundane sounding, yes, but to me this was exciting stuff (well maybe all apart from carrying the cable!) and all done with a passion.  And before all that could happen I don’t need to describe the 11 hour journey from home in Invergordon to London, surely?

My main impression of the shoot is a positive one. I remember all the positiveness of the crew who often worked with just a ‘bite’ to eat; their professional attitude towards everything, totally focussed on the job; and the total commitment to getting it done whatever it took. This damn the torpedoes spirit is what made it all work. And the camaraderie of the cast and crew is the amber nectar of filmmaking, it’s what I hoped for and I got it by the gallon. 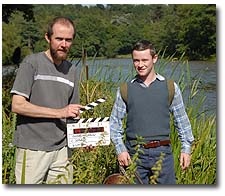 The actor, Devon Murray, was ready to act having rehearsed his part, and the camera crew, DP and director and camera were poised… only… the crew including the camera were all facing in the wrong direction(!!?) The trouble was these 8 of the crew and camera were in two boats which were tied together with a force 10 gale blowing and two of the crew frantically trying to paddle the boat so it at least was facing the suspenseful actor patiently waiting on the shore. While all this was going on the rest of us were happily singing the Hawaii Five O’ theme tune and ‘Messing about on a River’! The really strange fact was that it had been calm all morning right up until shooting time.  So there you had 8 grown men totally helpless and at the mercy of this freak ‘storm’ facing any way but towards the actor! After about five minutes it was resolved as the wind died down and shooting continued.

The other laugh I remember was when we were returning a punt to the boat house… I had cast off and sat at the back. Actors Bill Paterson and James Wilson were rowing. We’d only gone a few feet and Jim was tiring so I took over. I couldn’t believe how hard work it was and beads of sweat formed on my forehead as I concentrated all my efforts on ‘digging’ at the swirling water. And then I looked up.. then looked back… we’d only gone a few yards from the bank. Whew. Then I noticed a chain running over the side of the boat and quickly realised that there was another anchor still in the water!!

I was chuffed with my first real task on day one – that of greens man. I shinned 20 feet up an oak tree to get a suitably sized branch to be a dingle (this was a new word to me) and also disguising a water hydrant to look as though it had ivy growing up it, oh and also collecting pooh sticks – no, not another filmmaking term but Winnie the Pooh sticks for young actors to throw off a bridge.

To balance all this jolly stuff…. I had a sleep in my car by the side of the road on my way home one night because I couldn’t keep my eyes open because I felt sure they’d miss me the next day if I had been in a critical accident. lol. and another time I thought I’d lost the sound rushes for the day (oops).

No shoot is going to go totally according to plan though and this shoot was no exception. What I’ve learned is that whatever ‘stuff’ happens it happens to teach us so that we will be more prepared for the next time.

I’ve learned is to have bucket loads of patience. This I will definitely take and apply to my own filmmaking.

I’ve learned not to go spend a penny in long undergrowth where there are creatures that bite. (This I learned from our director, Chris Jones… Sometimes you can learn quite painlessly you just need someone else to do the learning for you!)

And I’ve learned the importance of forward thinking and good communication.

I’ve left an awful lot out and because I’m working tomorrow I need to get some sleep.

But what a great group of people I shared six days of my life with. Where else, tell me, do you get skilled and experienced people working for nout from dawn till past dusk and still have the presence of mind for a joke? Were we fools to do such a thing? No one in their right mind would, surely? We did it, I think, because we’re just ‘that sort’ of people and because we knew this was something special. I had the thought it would be a brilliant way of getting a different perspective of filmmaking to that on my own film shoots. And I wasn’t disappointed. This was a special week of film making. And the film, I know, is going to be special when it’s completed. How do I know? I know this because everyone gave their all. And mark my words it will show.

I hope I’ve presented an appropriate flavour of such a memorable week and one I enjoyed immensely.

Thanks for the opportunity, Chris.

Failing to plan is planning to fail... Film making success lies in pre-production
The FIVE reasons your career is held back… and how to fix it
Day Of The Flowers: Ten Tips for shooting in the heat and humidity abroad
The curse of too many great ideas… proliferation equals indecision
Stunt Co-ordinator gets onboard
After years working in the real world finding my life rushing past me faster and faster, i...
The budget is in…
Music track laying