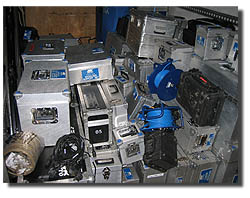 A few hours ago, the camera truck arrived and I took a pic of the contents for this blog. Blimey! Look at it all. Two 35mm cameras and all the bits. Not much like an HDV camera and tripod is it!

Right now I feel like I am strapping myself into a rocket ship and about to press the big red button. It’s a mixture of trepidation and excitement. I would say that I can’t sleep, but I am so utterly exhausted, I will be asleep in seconds the moment my head hits the pillow.

As I go into the shoot, I wanted to reflect for a moment. I have tried hard to take my own medicine in the prep for this movie, and I know that I have done as best I could on many issues. On reflection, here are what I know are things that are as good as they could be…

1. The casting of the kids in the movie. This is a world class junior cast that I can’t really see how it could be improved. Thanks to Cathy Arton. Casting director.

2. The script and storyboards. Every other film I have made I have known that the script could have done with more work. Not so on ‘Gone Fishing’. Whatever we may think of it when we get on set and into the edit, right now before we start shooting, I know I could not improve it as it is on the page tonight. Same goes for the storyboards.

4. Crew. There are a few members of the crew who blow me away. Cathy Arton, casting director, Vernon Layton, DP, Steph Wrate, in production, Jonathan Andrew, First AD, Eddie Hamilton, Editor… And I have so many new crew members to meet and work with tomorrow. Really, world class folk.

There is other stuff I know that could have been improved, but that’s all compromises borne out of a lack of time and money. So as I sign off for tonight, and shower before the first day of the shoot, I sleep with a sense of security. I know I am working with great people, that we are prepared as much as is possible within our given circumstance, and that the script, the very foundation of the project, is both moving and inspiring. Every person who has read it has commented on how much they loved it. That alone is it’s own reward.

Top 18 Strategies and Tactics To Get stuff Free or Massive Discounts
Richard Holmes Eight Rules for a ‘tightly resourced film’ screenplay
An actors guide to producing: Cast yourself in the lead role
Failing to plan is planning to fail... Film making success lies in pre-production
Day Of The Flowers: Ten Tips for shooting in the heat and humidity abroad
One day to go…
Minutes to go…