By Chris Jones on September 5, 2007 in Actors, Production, Production Design 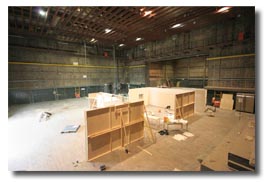 Final organisational touches are now coming together. This is a kind of fluidity to production that is very tiring – dates, crew, cast, locations, all interdependent, all changing regularly. It’s most frustrating when people pull out knowing the huge impact it has on us, even though they have been involved in negotiation and things have been made clear from the start.

We just lost out number 1 actor last night, this after three weeks of saying they like it and we were just negotiating terms. They eventually just said they had decided not to do it. No reason. We have second and third place choices for sure, but this was devastating as everyone was poised to go in – Linda Haysman, costume designer for instance now has to think about new costume hires and now three days before we shoot.

Agents act as a buffer for actors and often I don’t feel they convey the urgency of a situation to their client. In fact, I am not sure they convey anything at all! I suspect if actors were in direct contact with producers, this would never happen. Sure, have an agent agree terms, but get the creatives talking ASAP. Of course the agent does not want this as that reduces their negotiation powers. Sadest of all, agents don’t seem to really recognise that we are not the BBC, or Warner Borthers or some other fully funded body. For most agents, it’s one size fits all.

Some agents on the other hand, the ones who have bothered to really find out about what we are doing, have been amazing. I mean really amazing. So there is hope.

The pics here are shot by Ross Edwards who visited set  to help build for an afternon. Thanks Ross.

Top 18 Strategies and Tactics To Get stuff Free or Massive Discounts
How to run auditions for casting your film
Who is in your crew? A guide to low budget film crews
An actors guide to producing: Cast yourself in the lead role
What ONE thing MUST you get right in your next film?
Day Of The Flowers: Ten Tips for shooting in the heat and humidity abroad
Casting Coming Together
James Wilson joins an ensemble of young talent