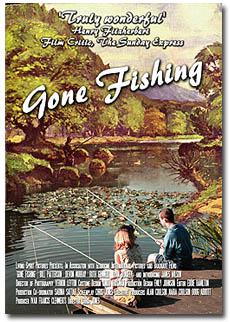 I have spent the day designing the first DVD cover for ‘Gone Fishing’. This is very different to a feature cover in one major way – it will never act as a POINT OF SALE for a buyer. The only people who will get the DVD will either be given it, or come across it some other way, certainly not by pickup it up and thinking ‘This looks good, I must buy or rent it…’ Having received many short films on DVD in my office, I noticed how most attempt to look like a feature film in some way. I am going a different way with ‘Gone Fishing’ in the hope of standing out a little.

Now I don’t have to aggressively  SELL SELL SELL via the cover, it gives me the chance to start the ‘story experience’ before viewers even gets to the DVD. I am hoping that we will win some festivals and awards, and that, coupled with the great cast, will pique the interest to the point where viewers will put the DVD into their player.

I have opted for a nostalgic, fishing book feel. This was directly influenced by a book prop that I had found on eBay, it’s a book from the thirties on angling with a wonderful painted cover. The DVD cover will now set up the viewer expectation of the gentle, lyrical feel of the film, and of course, the angling aspect already implied by the title.

I like the artwork very much, though I am aware that it’s not a throat grabber. I think that’s the point.

In due course, we will be adding more to it, as I said, hopefully awards from festivals. Of course, the whole thing may be re-invented too. Ah the creative journey to excellence is a rocky one.

Nothing is constant, except change… The death of Prime Video stores
Should you distribute your short on DVD and BluRay? Guest blog from Danny Lacey: 10 things...
Making Feature Films For No Money: How I Made My “★★★★ Intense and Tender Psychological Th...
Subtitles for Festivals
One day to go… Gone Fishing Premiere
Pickup shoot is 100% success!
Gone Fishing gets its 100th contributor!