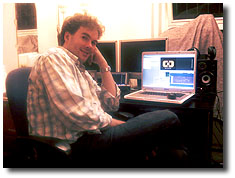 So we locked the picture edit at 1.45am last night. Editor Eddie Hamilton and I made a huge number of tweaks that at first glance, are fairly minimal in impact, but we both know that they made a big difference holistically. At one point Eddie stopped and looked at me grinning and commenting that ‘it’s so good, and so rare, to get the chance to come back to an edit after a short break, to make these small but important changes…’ I knew exactly what he meant.

It’s not that the previous edits were wrong or bad, it’s just that some of them could be better. Editing is often like musical composition, you are looking for rhythm, using timbre of voice, contrast of image and sound, timing of performance, all to its maximum effect within the confines of the story and the style of story telling. Editing begins as a technical construction, moves into the world of craft and ends up in the realm or artists, using feeling and emotion to guide your choices.

During this final edit, we played with a few new ideas too, some of which worked, some of which didn’t. We also ditched a lot of the shots of Goliath, the killer pike, replacing him with swelling water. This was simply because water is hard to scale in the mind of the viewer (something we discovered and found surprising in test screenings), and Goliath simply looked smaller than he actually was. I learned something there – about water, scaling it, using slow motion and scaled props in shot etc… As Eddie put it though, we had to shoot it to know that it wouldn’t work fully (though there are still shots used). Film makers ‘due diligence’ as it were. 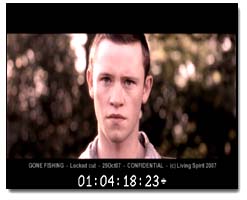 Last night also included making all the deliverables for the sound guys – exporting all the audio, making a QT files with time code, and adding an academy leader. It was when Eddie added the Academy leader (the countdown clock at the start of a film) that I got goose bumps, mainly because I heard the ‘plop on two…’ This is a one frame beep that sound guys use to sync the film up (of course time codes and such usually take care of all of this but it’s nice to have this old school rock solid backup). And it’s the plop that for me is synonymous with sitting in the final mix, in a dubbing theatre, and watching the magic of sound mixing bring your film fully to life. I was giddy as a schoolboy!

There is still a long way to go, completing VFX, track laying sound, mixing the sound, clearing music, grading picture, checking and making titles, making a DVD, making a Blu Ray (that’s a new one for me!). Not to mention, festivals… and the attempt at the Oscars!

One day to go… Gone Fishing Premiere
Dick Smith, legendary makeup artist has died, his legacy for me, cannot be underaterd
Do you love old school practical visual effects and their artists? Rick Baker, Rob Bottin,...
How I made a SciFi Epic Film on a shoestring... Making KIDDO
Subtitles for Festivals
Compiling Clips for the Gone Fishing Course
The Accounts For Gone Fishing Are Done!